Visit of delegation from Leibniz University

On May 25, 2015 delegation from Leibniz University of Hannover (Germany) visited ETU "LETI". 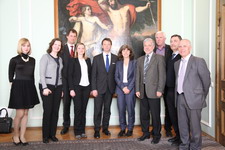 On May 25, 2015 delegation from Leibniz University of Hannover (Germany) visited ETU "LETI".

Visit to ETU "LETI" began with excursion to the museum laboratory of A.S. Popov where members of the delegation had an opportunity to see inventions of a great scientist. Then there was a meeting with Rector V. Kutuzov where they discussed new possibilities for cooperation. In addition, for exchange of experience and discussion of scientific research, scientists from Hanover met with leading scientists of Faculty of Electronics, Faculty of Radio Engineering and Faculty of Information Measurement and Biotechnological systems of ETU "LETI". At the end of the visit foreign guests had tour to the Center of Microtechnology and Diagnostics (TSMID).

Every year students and graduates of different faculties of ETU go to Hanover under the program of exchange education, on internship and for carrying out of joint research at Leibniz University in Hanover. In the 2014/15 four students from ETU went on internship to Hanover.

Since September 2015 there is a master's program in physics in English at Leibniz University that will significantly expand the existing cooperation.