Visit of delegation from Brasil

Visit of delegation from Brazil universities to ETU "LETI" was held on December 9, 2014. 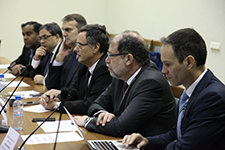 Visit of delegation from Brazil universities to ETU "LETI" was held on December 9, 2014 under the project of improving of competitiveness of Russian leading universities of Russia among the world's leading research and education centers ("Project 5-100").

In the conference hall of administration a meeting was held. During it the representatives of ETU acquainted foreign colleagues with the history and scientific achievements of the university as well as with bachelor's and master's programs.

At the end of the conversation visit to the laboratory of the Department of Bioengineering Systems and Electron Devices and Systems was organized for the guests, during which members of the delegation got acquainted with the technologies developed by scientists of LETI and communicated with students.

Visit of South American colleagues to Russia in the area of the "Project 5-100" was the result of agreements reached at the talks of Deputy Minister of Education and Science of the Russian Federation A.B. Povalko with the president of the Brazilian Association for International Education (FAUBAI) José Celso Freire Jr. at the conference of the European Association for International Education EAIE-2014, held on September 16-19, 2014 in Prague.

The program of the visit was intended to give the Brazilian guests the most complete picture of progress of the "Project 5-100", achievements of Russian higher education and diversity of opportunities that it can offer.