The international engineering faculty is formed in St. Petersburg 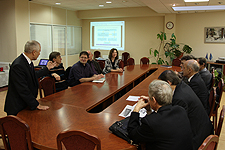 On June 6, 2012 St. Petersburg Electrotechnical university "LETI" (SPb ETU) and German Ilmenau University of Technology (Technische Universität Ilmenau, TU Ilmenau) signed an agreement on opening Russian-German Engineering Faculty (GEFAC). The main goal is to internationalize the teaching process at LETI. The first student from our university has already started studying at TU Ilmenau. She will spend there 2 semesters.

GEFAC activity is focused on collaboration of SPb ETU and TU Ilmenau in teaching engineers and masters from partner universities. Students from LETI will get an additional education in German and English, as well as a Master`s degree from TU Ilmenau. Major subjects, according to the agreement, will be computer science, engineering computer science, electrical engineering and IT, power industry and automation, mechatronics, optronics and applied physics.

Not everyone will be able to study on GEFAC. A student has to hold a Bachelor degree with good grades, as well as good marks during the first year of Master`s program. The second condition is fluent German. After a contest those who are accepted will study in TU Ilmenau for 1 or 2 semesters according to an individual program.

During this time students will have lectures, seminars and practical work with further tests and exams. Undertaking an internship at the university or on enterprise is also stipulated. At the end of the course students have to present and successfully defend a master` s thesis in German which will provide them a German diploma. During the whole time of embedded studying students will receive a schollarship.

This course in Ilmenau is considered to be additional to a general one. After coming back to LETI students have to pass exams.The subjects coinciding in LETI and TU Ilmenau cirriculum will be automatically put on the diploma transcript. To get an assessment on other subjects students will need to take exams or final tests. Then a master`s thesis is to be defended at LETI to get a Master`s degree.