On the 13-14th of November 2012, LETI hosted the 5th annual “Palette of Languages and Cultures” Forum. What is it? Learn here! 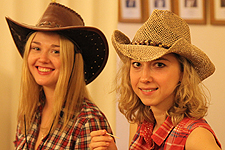 On the 13-14th of November 2012, LETI hosted the 5th annual “Palette of Languages and Cultures” Forum. A question inevitably arises – so what was this all about? The forum’s sophisticated name holds a simple answer – to promote the ‘palette’ of various cultures and take one step closer to a more diverse and tolerant world of LETI.

Why must we learn to be tolerant? In the world of increased globalization and diversification, the forces affecting the whole world and LETI is not an exception today, cultural sensitivity is a path of success for any student. Tolerance is accepting and valuing differences between people, but appreciating that these differences enrich us.

Students from all over the world are studying in LETI , and what is more – these are people not only from the very remote places of Russia, but also from several – one might say, ‘exotic’ – foreign countries.  The forum saw a great variety of representatives from all four corners of the world, appropriately united in Saint Petersburg, a city of dreams. Perhaps this is why organizers have chosen the subject of the 5th Forum that emphasizes this unity through its title, “Nationality – Petersburger”. 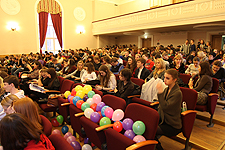 The research and practice conference included presentations of both Russian and foreign students of ETU.  Its goal was not only to discuss the high-profile issues of tolerance, but to examine the two-fold effects of diversification – how does the increased foreign presence affects St. Petersburg and how does the city, in turn, affects those who seek residence within its boundaries. This portion of the conference was promoted with the bus tour entitled “Multinational Saint Petersburg”, which was an integral part of the Forum’s itinerary.  Following the conference and the bus tour, the guests took part in a traditional exhibition of national cuisines. And once the stomachs were full, the event simply would not be complete without a concert! The forum was a testament to diversity and tolerance, here different people, students from different faculties, despite the skin color and religious believes gathered together in celebration, showing who they really are and that they do really care about the issue at hand. Perhaps that it is what it was all about. 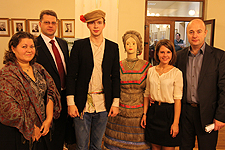 This would not have been possible without the continuous involvement of the Foreign Language Department, which worked tirelessly to examine and promote the subject of tolerance in our university. However, the event has computed the attention of many and has been a university-wide effort, promoted by various students and faculty, as well. Tolerance and diversification are the issues on the table for many institutions around the world. Our university recognizes the importance of raising awareness and respecting diversity as the elements of future success.

Tolerance is one of the driving qualities in a person. It is one of the indicators of good upbringing and manners. Petersburgers are always described as honorable, hospitable, and good-mannered. Do these qualities appeal to you? So maybe you are a Petersburger, too, and it does not matter where you come from. Despite your nationality or place of origin, being a Petersburger is in the heart – only you are the one to decide…