The 6th interuniversity forum «Palette of languages and cultures» took place on November 12th-13th, 2013 in LETI. The Forum is organized by the Chair of Foreign Languages and dedicated to the International Day for Tolerance. 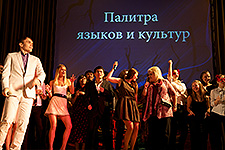 The 6th interuniversity forum «Palette of languages and cultures» took place on November 12th-13th, 2013 in Saint Petersburg Electrotechnical University "LETI". The Forum is organized by the Chair of Foreign Languages of LETI and dedicated to the International Day for Tolerance.

The first day of Forum was organized as a scientific-practical conference, where the participants of the event presented their reports. Tanja Karppinen, a teacher at the Lappeenranta University of Technology, told about the traditions and customs of Finland.

«It’s good that we are neighbors with Russia. Thanks to that we have more similarities than differences», – Karppinen said.

Valence Manaragena, a lecturer of the Chair of Computing Engineering and the head of the charitable organization «ICHUMBI» which provides help to refugees from Africa, told guests an African legend about god-man Ryangombe. Elena S. Tikhonova, a docent of the Chair of Foreign Languages, drew analogies between novels about Harry Potter and plots from Indian and Greek mythology as well as compositions of other writers.

Konstantin Terekhov, graduate of the Chair of Foreign Languages, told guests about the fantastic plots in the mythology of different peoples concerning the origin of man. Linguistics students spoke about the comparison of Russian and Finnish linguistic cultures, exotic creatures of the peoples of Russia, demons in the outlook of the Kazakh people and of the mythology of the Indians of North and South America.

On the 2nd day of the Forum guests tasted national cuisine of Russia, the USA, Great Britain, Canada, Lithuania, France, Azerbaijan, Germany, Ukraine, India and Caucasian people. After that, Linguistics students and foreign students of LETI show their performance to spectators in the assembly hall.

«Nowadays, tolerance is a broad and important idea for Saint-Petersburg. More than 70 percent of students in Saint Petersburg are people with different cultural peculiarities. That’s why it’s important to study the problems of tolerance and cultural interaction. I hope that fantastic characters will help us to become close friends as it is written in fairy tales of different peoples», – Nikolay V. Lysenko, Prorector of LETI, said.

Also, Aušra Semaškienė, the Consul General of the Lithuanian Republic, Ali Kadyrov, the Attache of the Consulate General of Azerbaijan Republic, Margarita F. Mudrak, the Chairman of the Saint-Petersburg Association for International Cooperation, visited the event.

«As a consequence of the globalization the problem of preservation of our culture became relevant. Fantastic and fairy-tale heroes help to save identity which unites people in multinational countries such as Russia and the USA», – Bruce I. Turner, the U.S. Consul General in St. Petersburg, mentioned.

The assembly hall was full of people. During the performance students told the audience about such characters as vampire, zombie, troll, witch, dragon and others. In addition, the students showed their dancing and vocal talents: among the presentations there were the Argentine tango and songs in Russian language, performed by Chinese students.