On November 20, 2015 St. Petersburg educational forum took place.Representatives of universities of St. Petersburg including "LETI" took part in the event. 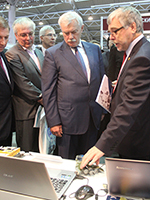 On November 20, 2015 St. Petersburg educational forum which is one of the main parts of Week of science and professional education took place in "Lenexpo". Representatives of universities of St. Petersburg including "LETI" took part in the event.

The organizer of the Forum is the Committee on science and higher school of St. Petersburg with assistance of Council of rectors of SPb universities, Board of directors of average special educational institutions of SPb, Union of industrialists and businessmen of SPb. Among guests of honor of the event were the city governor Georgy S. Poltavchenko, deputy head of Federal Service for Supervision in Education and Science Alexander Y. Biserov, acting as the chairman of KNVSh Irina Y. Ganus, director of "RIA Science" Dmitry Y. Guzhelya, director of Department of state policy in the sphere of preparation of personnel and DPO Natalya M.  Zolotareva.

Within the business part of the Forum devoted to interaction of system of professional education and employers there were round tables and meetings with participation of representatives of public authorities of Russian Federation and St. Petersburg, heads and specialists of institutions of higher and secondary professional education, scientific organizations, industrial enterprises, associations of employers. 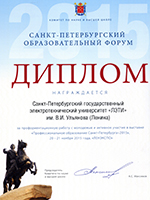 The exhibition part included 2 large exhibitions. Within an exposition "St. Petersburg – the city of science and innovations" leading universities of the city and research organizations presented their last developments.

At the exhibition “Professional Education of St. Petersburg — 2015” intended for graduates and on pupils of senior classes of schools of St. Petersburg and the Leningrad region, higher education institutions of the city told about educational programs, Regulations of Admission and specifics of training.

Among scientific achievements presented at the exhibition by our university were the anthropomorphous robot, the portable x-ray device "PARDUS-R", system of remote diagnostics of tablet analyzers and many other developments of small innovative enterprises of Science and Technology park of "LETI".

"It is very important for us to expand information space and to motivate the most gifted children to enter LETI. For realization of these tasks we represent our university on different platforms, including this educational forum. Efficiency of such events which we estimate following the results of enrollment campaign is high" – Head of the Applicant center A.A. Minina says.