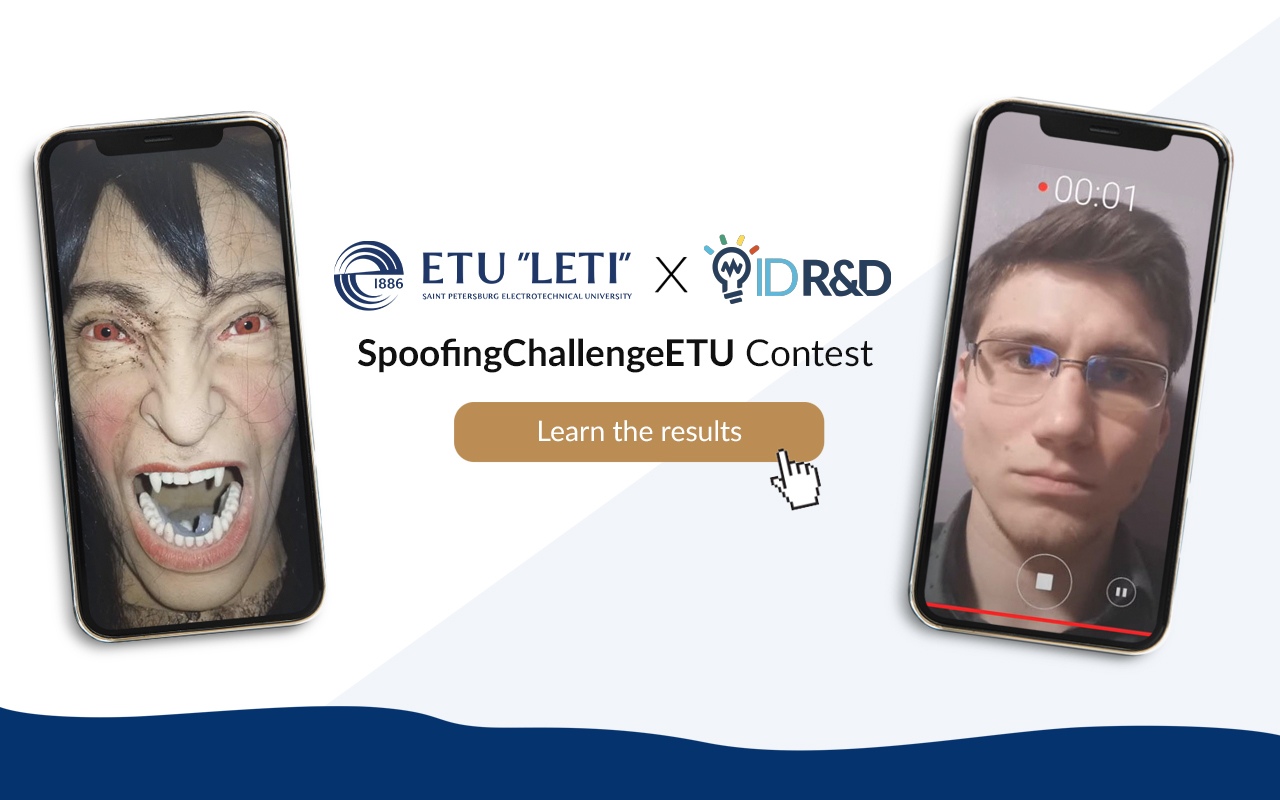 ETU "LETI" released the results of the SpoofingChallengeETU contest on hacking the face antispoofing system.

From May 1 to June 15, 2020, ETU "LETI" together with the ID R&D company held a competition on hacking the face spoofing system, a system that prevents false facial verification using artificial intelligence.

The competition aims to collect data to improve the existing anti-spoofing system. The system is based on machine learning technologies, so not only single cases of hacking and/or incorrect responses are important but also correct system responses.

18 students and employees of ETU "LETI" faced the challenge. They had to "trick" the anti-spoofing system and help the organizers improve the product they had created.

"The competition allowed the participants to face in a playful way real tasks, which actively use artificial intelligence technologies. They had to trick the anti-spoofing system that detects the spoofing of a face in front of the camera. The winners of the competition managed to do it, which proves the superiority of the natural intelligence of the participants over artificial intelligence! Also, we managed to make the life of our students in self-isolation more interesting, and the winners could make a little money. We also thank our partner ID R&D company, which provided access to its anti-spoofing system."

"I found out about the contest by accident: it appeared in my social media feed and immediately interested me. Probably everyone wants to feel like a hacker, and in this competition, you do not need deep knowledge for this; it rather requires ingenuity and imagination. Facial anti-spoofing systems are very relevant: in many devices, such as smartphones and laptops, there is face recognition implemented, and these functions must be able to determine whether it is the person in front of the camera or a photo/video played on the monitor.

Alexander notes that during the contest, he paid the most attention to hacking the anti-spoofing system using the monitor. He recorded several videos with his face and displayed them on the screen. However, the system turned out to be advanced enough to easily determine that it was a monitor. "And I could see that the test videos had flares and other artifacts on them that occur when you shoot the monitor screen. After a long time, I found a loophole: the camera doesn't capture distortion caused by the monitor when shooting from a distance, and that's why I decided to try shooting the monitor with some zoom-in. Also, a little shaking of the phone when shooting had a positive effect. We had to experiment with the video, which was played on the monitor: lighting and contrast played a major role. In the end, I identified several patterns, which I described in detail and sent in the app," the winner says.

"I was interested in taking part in the SpoofingChallengeETU because it allowed me to "battle" smart technology with a regular phone, a laptop, and, of course, creativity!"

A separate category took into account the median value of the number of photos in different categories. With the result of 5.5 and the total number of 127 uploaded images, the winner is Dina Kroders, an engineer of the Department of Automation and Control Processes. "For the first time, I had an opportunity to take part in the competition, which is not focused on the people with education in humanities, which I have. But the prospect of breaking or hacking something seemed tempting and manageable. And as reality has shown, I was not mistaken in my destructive skills," Dina said.

The winners and prize winners will receive money prizes, as well as an opportunity to participate in writing an article on the system testing.