In the “Zenith” sport complex today 01/04/2013 a mini football tournament has taken place among teams made up of students of LETI with different nationalities; which supports the idea of “Sport versus Racism.” This tournament was organized by Valentin B. Schukin (Head of the Department of Sports and Physical Education), and with the help of the Department of International Relations. The tournament started with an introduction ceremony where students listened to the significant speeches of Nikolay V. Lysenko ( pro-rector for Students Activities ) and Albina Z. Tabatadze (Director of the Foundation Course) where both explained how sports break the boundaries created by the thought of racism, and wished the students good luck in their matches. 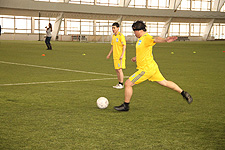 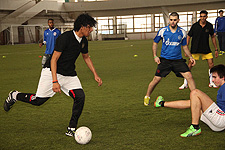 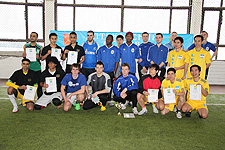 After the matches a convenient celebration was held to present the students with certificates of participation, while the winner team received the Cup of this tournament; both the cup and the certificates were provided by the municipality “Aptekarsky ostrov.”