Screens, Trampolines, and Interactive R&D Project Exchange: How LETI Students See the Transformation of Its Spaces 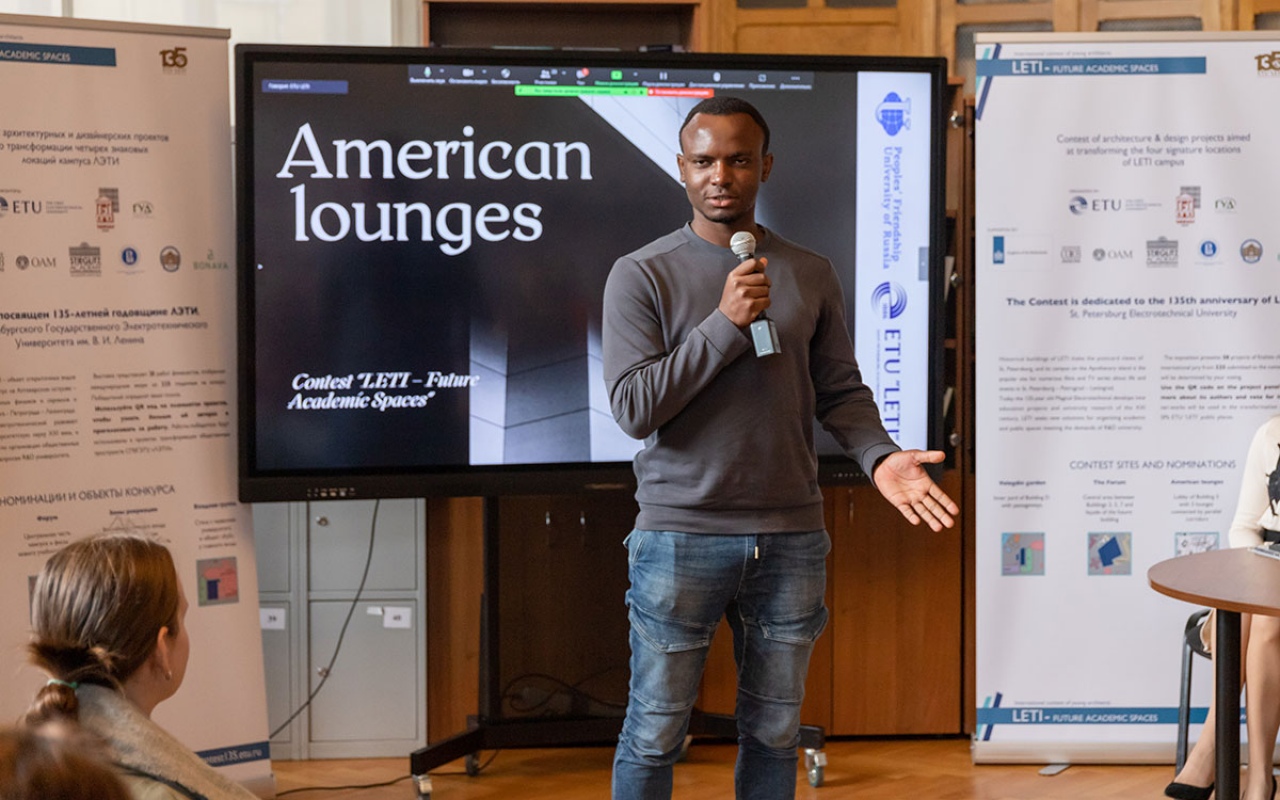 International and Russian students of LETI discussed proposals for the development of public spaces on the campus, opening a public vote for the best project of the architectural contest "LETI: Future Academic Spaces".

On September 7, the reading room in the LETI's library became a platform for students to discuss future changes to the university's environment and express their vision and ideas for development. The subjects for the dialogue were the projects of the finalists of the architecture contest for LETI public space transformation.

Before the discussion, Sergey Pilipenko, Deputy Vice-Rector for International Affairs at RUDN, spoke about how Russia's most international university plans to develop its campus based on the principles of green and barrier-free environment.Anastasia Minina, Vice-Rector for International Affairs at ETU "LETI," presented four nominations of the architectural contest and spoke about the development of the physical, information, and digital environment of the university.

"Every year, LETI advances and becomes an increasingly internationalized university. We are working not only on the quality of education but also on the campus. That's why we hold an architectural contest and discussions to determine the way forward."

Participants discussed the projects presented by the finalists in the videos at all four nominations, and the creative ideas of the young architects elicited many opinions and suggestions for further development of the campus beyond the four proposed locations. The students liked the works with green areas protected from the rain and places to actively relax and socialize with friends.

Participants in the online academic mobility projects and double degree programs noted how great it would be to connect with international colleagues from these very places, bearing the unique atmosphere of the LETI campus, and then, after borders open, to meet them in the renovated spaces. "As part of a recent online project, our Asian colleagues conducted virtual tours of their university campuses. They usually create large areas for relaxation and brainstorming, something we don't have yet. Such joint spaces will be very useful for us," said Maxim Sitnikov, a graduate student of the Department of Electrical Technology and Converter Engineering at ETU "LETI"

Another smart space project was proposed by Dennis Ikeme, a student of the Faculty of Electronics of ETU "LETI." He believes that it is necessary to create more means to unite talented students into teams, and one of the renewed places with an interactive screen, where any researcher can leave information about his project and invite partners, can do the job.

Daniil Mavrin, a student of the Faculty of Humanities of ETU "LETI," mentioned unused spaces on campus, such as the second entrance to Building 5. The place, which does not function as intended due to safety requirements, could become an important part of the recreational zone. 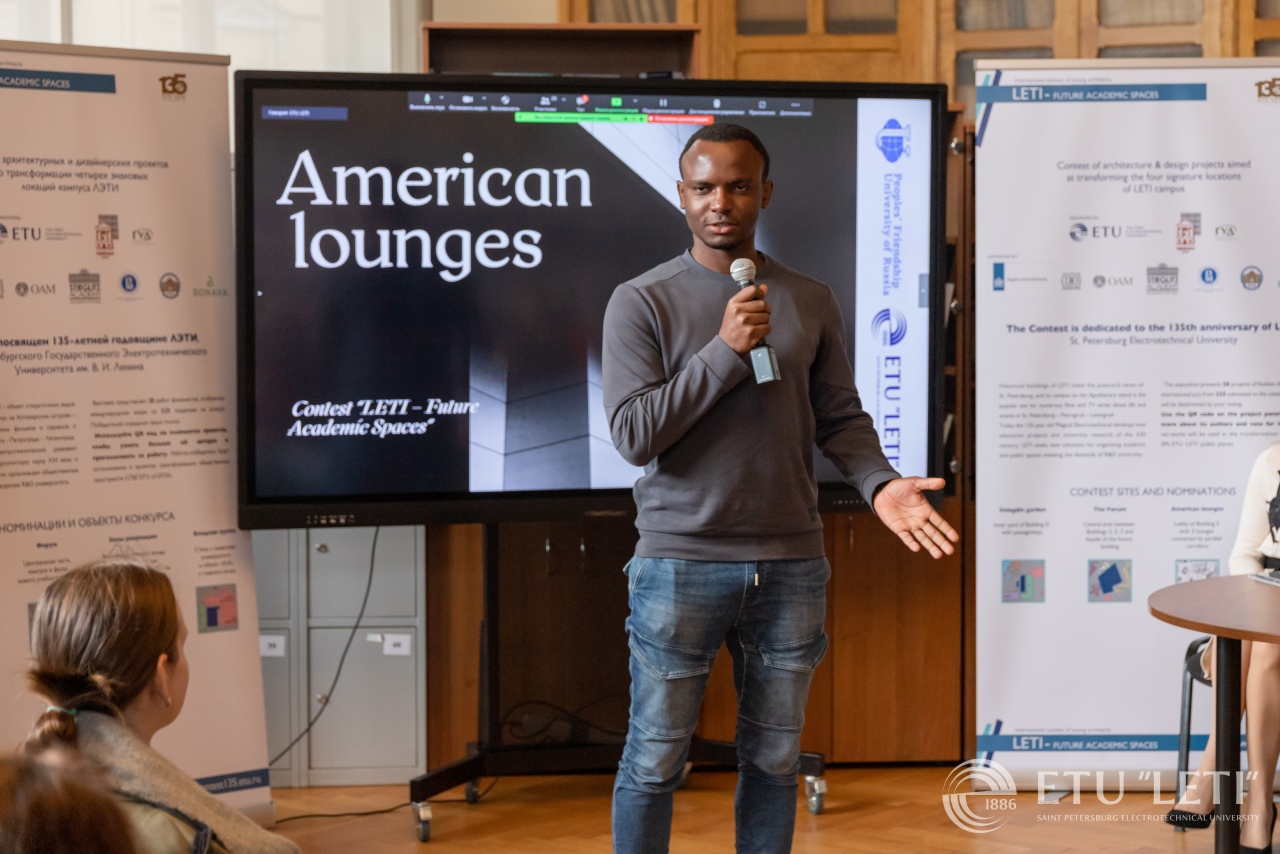 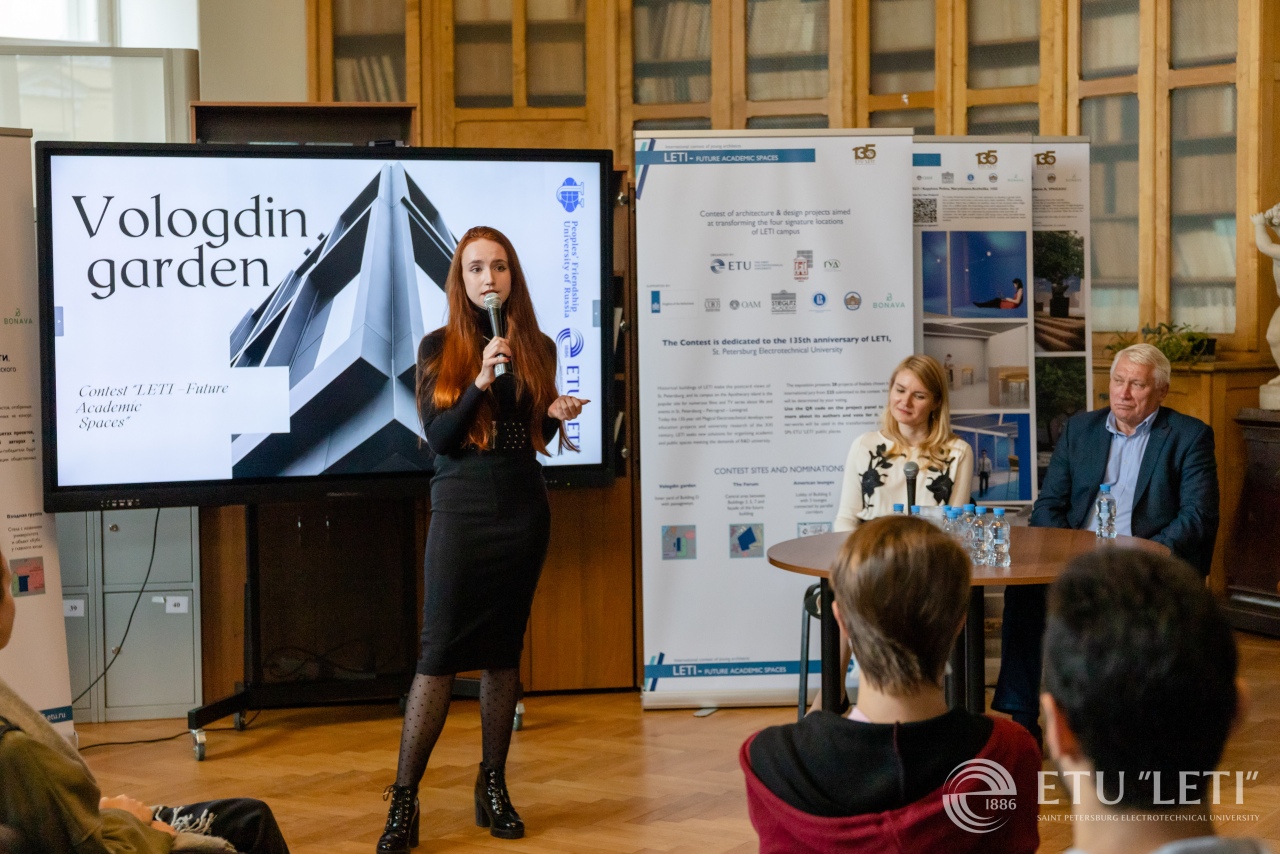 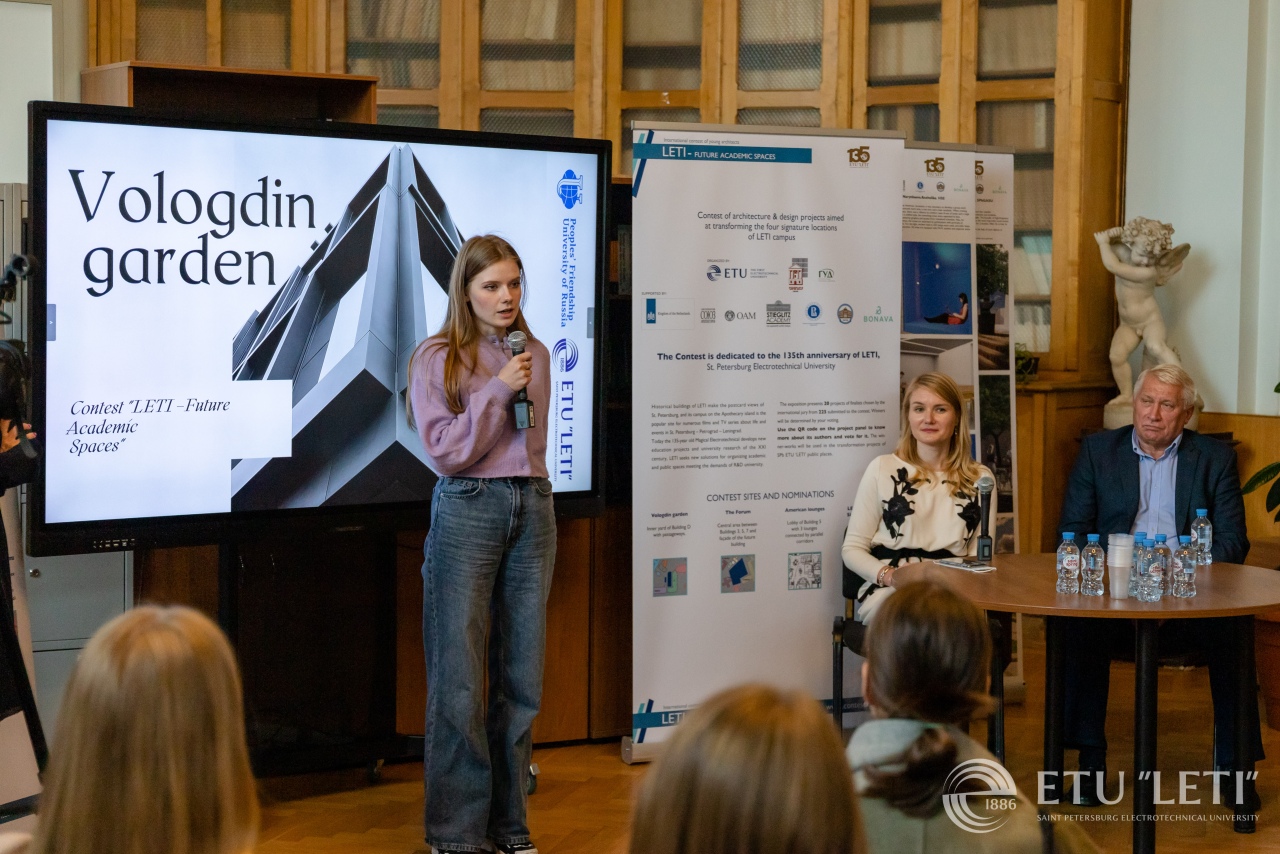 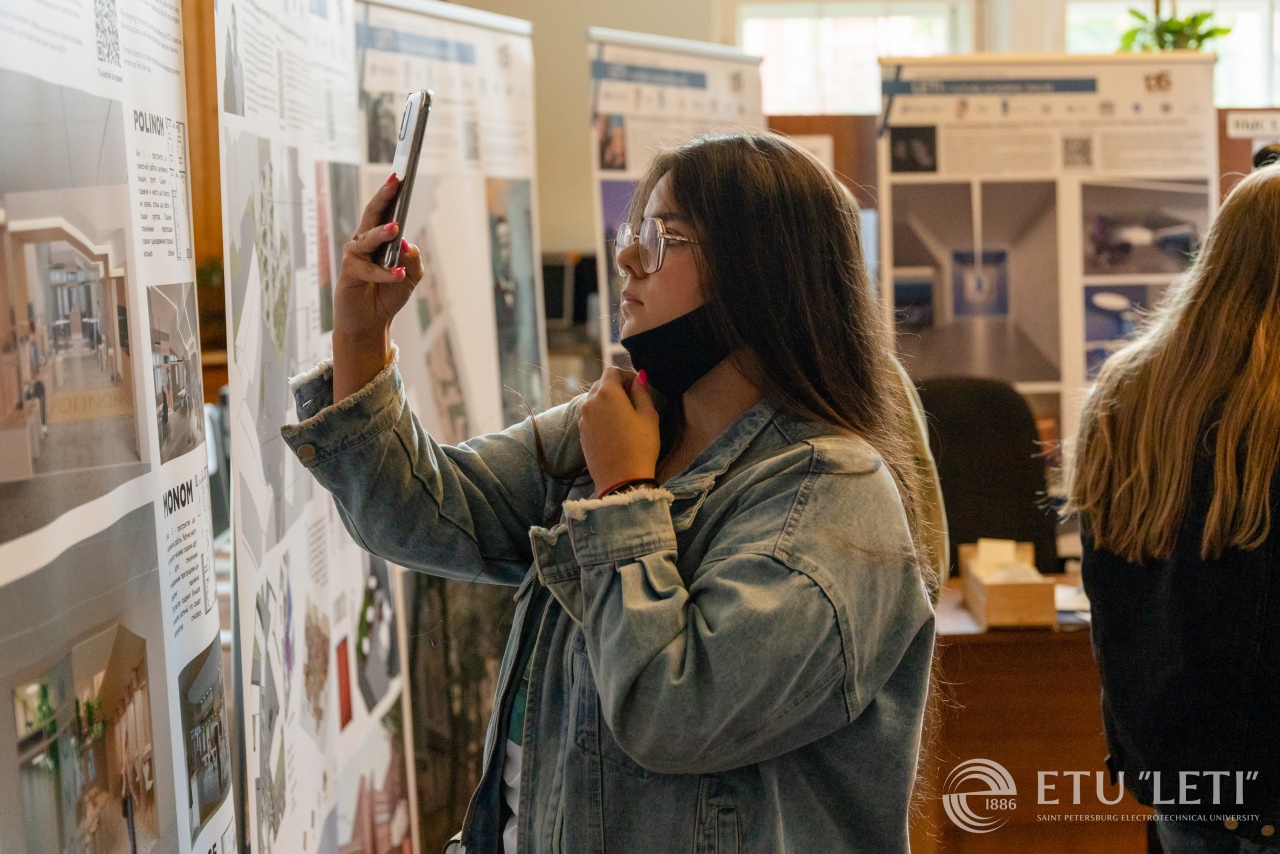 A popular idea in the discussion was solutions that would balance the academic workload and in-depth research with entertainment opportunities.

"A specific problem we as students suffer from is stress, and sometimes it can cause mental and physical problems. I would like to suggest creating some zone for stress relief for students. I think it will be a step forward in terms of student productivity at the university."

The young architects have provided such features: the projects have swings, jumps, slides, and even an electric theater with a foyer and a mirror.

"Today, LETI can be classified as a classical university, which predominantly has standard classrooms and laboratories. We face the task of transferring to an open university by 2030 with modern laboratories and classrooms, transformable rooms, co-working spaces, lounge areas and rooms for business communication," summed up the discussion Vladimir Pavlovskikh, the Head of the Property Development Office ETU "LETI"

You can see the best contest solutions for work and leisure in the public areas of the LETI campus and vote for the favorite one at the exhibition of the finalists' projects. Projects and voting are also available on the contest page.