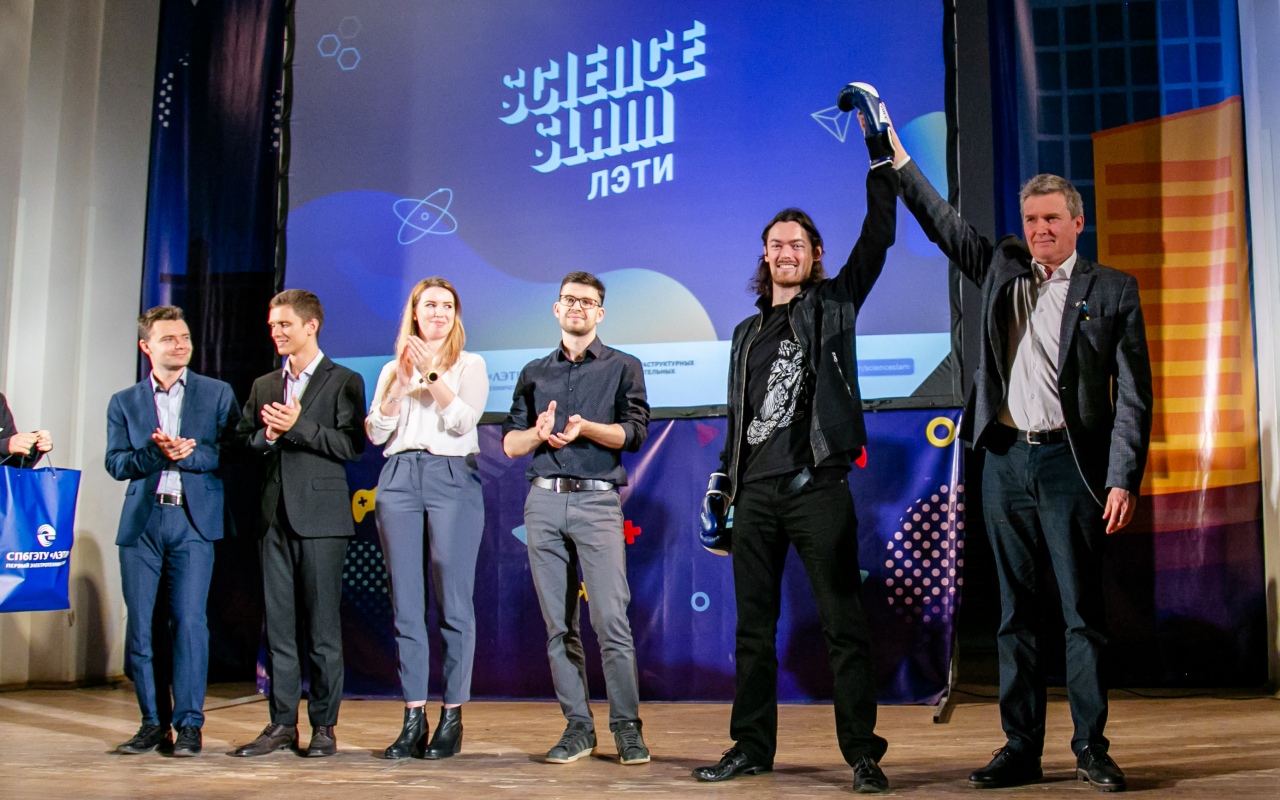 On November 14, the last round of the Science Slam of the Fund for Infrastructure and Educational Programs and the Science Slam Russia took place at the ETU “LETI” as part of the program to promote science in the country's leading universities.

The assembly hall of the university turned into an intellectual ring for one evening, in which five young scientists competed: each of them had only ten minutes to present their ideas in a witty and simple way. The judges of the battle, according to the tradition of the slam, were the audience, the most incorruptible and objective jury. The winner was determined by the loudness and duration of the audience applause.

Viktor Luchinin, Director of the Department of Science of ETU "LETI," opened Science Slam LETI, greeted the guests and participants, and recalled the history of the university and the great people who worked at it. 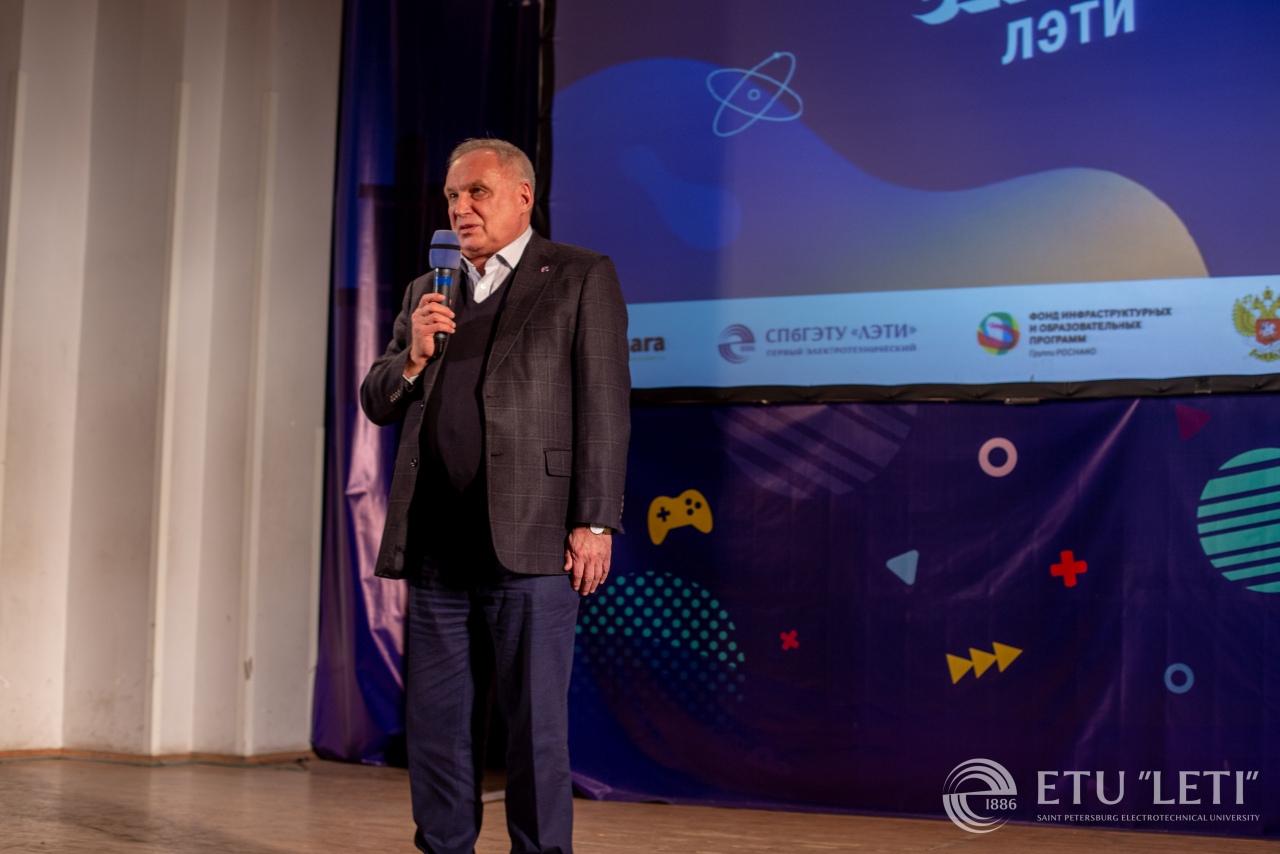 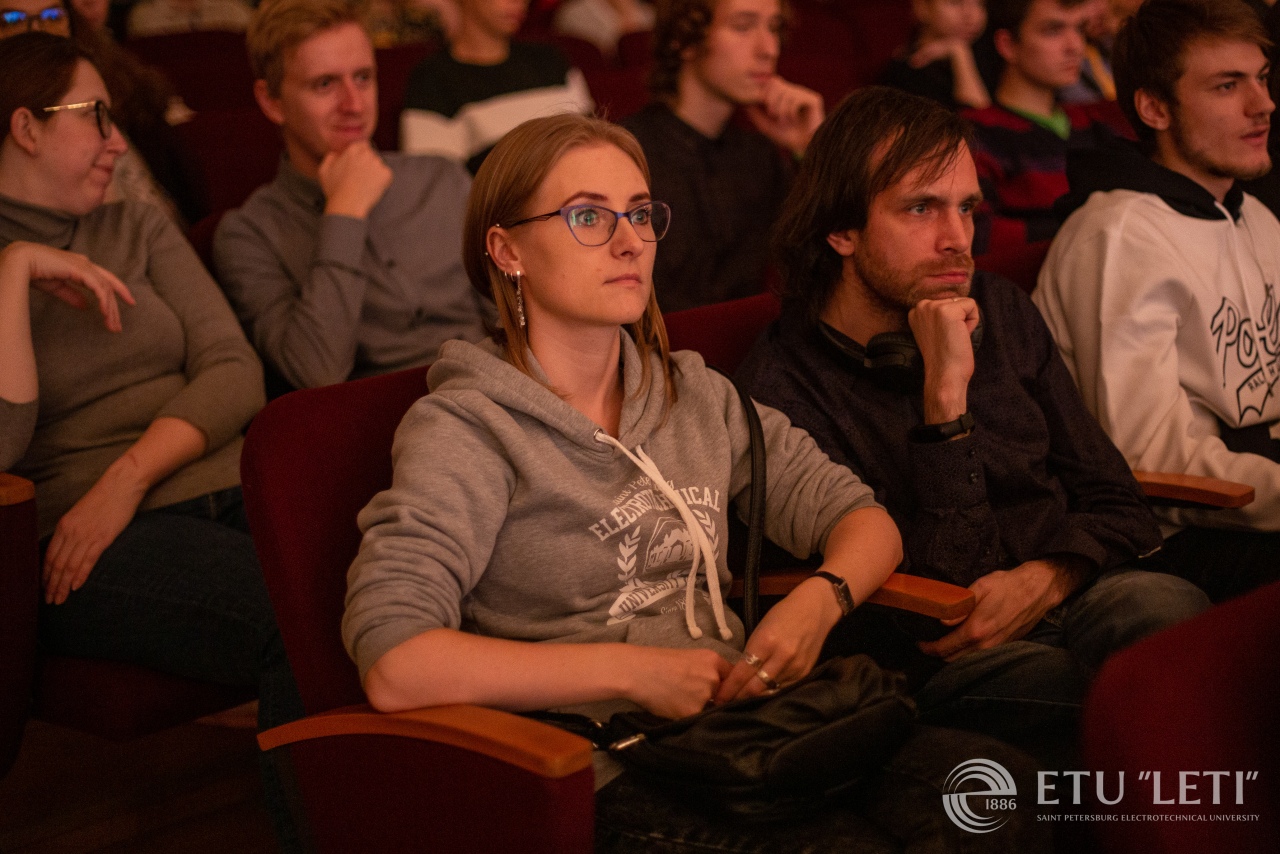 Special guest of the event Denis Prokuratov, a graduate student of the Department of Photonics of ETU “LETI,” an employee of the State Hermitage Museum, and a winner of the St. Petersburg Science Slam in 2015, started the scientific show but he did not take part in the competition. He explained why scientists burn laser artworks, showed which tattoos were popular before our era and how new technologies help to recreate the life of our ancestors from archaeological finds.

“I worked on this topic in my thesis, and today I would like to help the guys who are taking part for the first time. I prepared my speech for the audience to meet them more warmly.”

Today, chaos theory moves from the narrow field of mathematics to the mainstream; everyone has heard about the butterfly effect. The first performance in the competition program was devoted to one of the possible areas of practical implementation of chaos theory. Timur Karimov, Senior Lecturer at the Department of Computer Aided Design Systems, resident of the Youth Research Institute ETU “LETI,” explained how chaos theory will make the world more predictable, what are the advantages and disadvantages of modern metal detectors, and how we can make subway trips safer using new technologies. 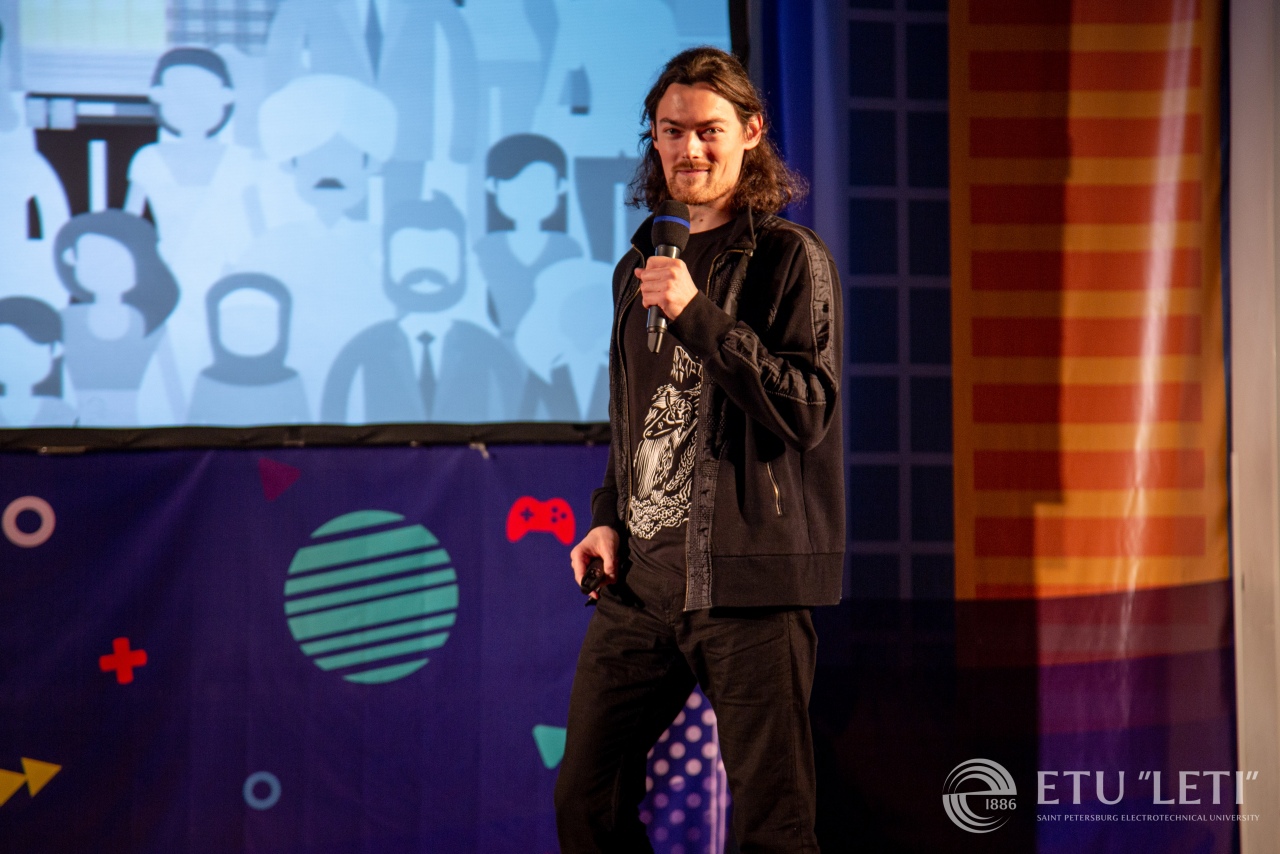 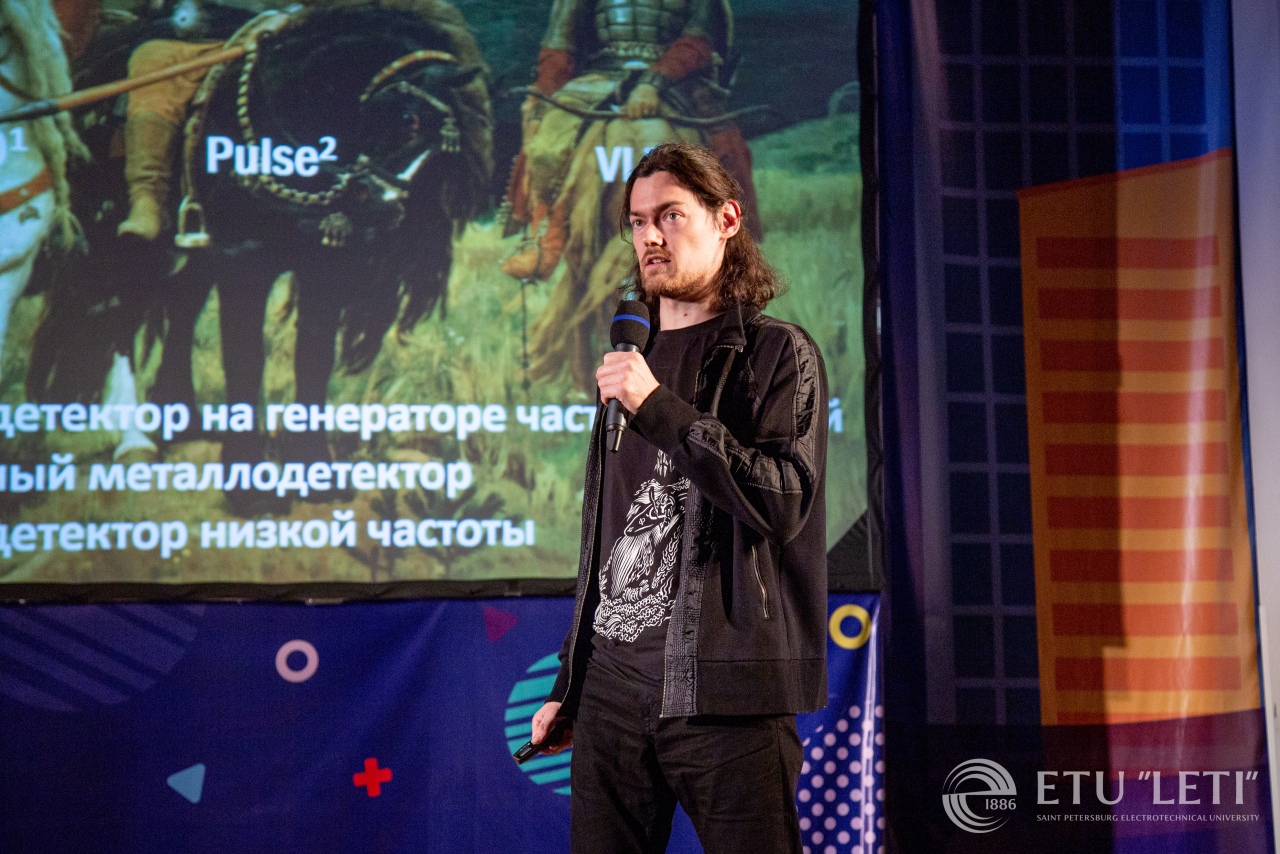 The second presentation was dedicated to virtual and augmented reality technologies. Vladimir Kuzmenko, a postgraduate student, Assistant at the Department of Electromechanics and Robotics, an employee of the Saint Petersburg State University of Aerospace Instrumentation engineering school, shared his knowledge on how these technologies help to make laboratory experiments without leaving your home, and what prospects they offer in distance learning. According to Vladimir, the biggest problem in applying the new technology will be not to step on the cat in the apartment, while doing experiments in a virtual laboratory.

“The technologies that I talked about will soon allow laboratory work at home. It will be more secure, affordable, and individual at the same time. Also, in virtual reality, you can reproduce what cannot be done in our reality. Before the slam, we had a lot of work with a coach who told me how to interest the audience, what to talk about, how to hook the audience with the problem.”

Olga Brikova, graduate student and engineer at the Department of Automation and Control Processes of ETU “LETI,” explained to the audience what a bioreactor and activated sludge are and how they are related to biological wastewater treatment systems, and how employees of her department suggest modernizing treatment facilities at enterprises.

“I am modeling water treatment processes and developing a system to manage these processes. I wanted to share the research conducted at our department to tell why this is important in the simplest form possible. For me, Science Slam is an experience, an opportunity to learn how to explain complex things in an accessible language.”

Nikolai Yanchuk, a student of the Faculty of Information Measurement and Biotechnical Systems of ETU “LETI,” showed how to detect defects in railways using a laser and why a new device is more efficient and cheaper.

“For me, participation in Science Slam is a great experience in presenting my work; I still have to defend my bachelor's and master's degrees. This experience will help me in the future.”

Vladislav Lemozersky, a graduate student of the Department of Micro- and Nanoelectronics of ETU "LETI," completed the battle. His work is devoted to an important medical problem that hematology is trying to solve: high-quality, fast, and safe blood transfusion. He told how to sort blood cells using acoustic waves.

“In this project, I wanted to show another side of me and speak in simple words for non-specialists. The topic is complex, so you have to be creative to make it understandable."

Sergey Filippov, Head of the Directorate of Popularization of the Rusnano Fund for Infrastructure and Educational Programs, took the stage to announce the results and greet the participants.

"Thank you all! We could discuss football games, how the UFC fights, what is being discussed now at the cultural forum, what to do with the center of St. Petersburg, but today we are discussing the composition of blood and how to filter it, water and laser work. Last year we were asked: “What, in Russia, there is science and young engineers?” This year we held ten university slams from Kaliningrad to Vladivostok. We see on the figures that there are engineers in Russia, there is science, and this is interesting to a huge number of people. We proved it experimentally!”

Five young scientists competed in the battle, but a high-precision sound level meter determined the best contender by an ovation of the audience. Timur Karimov conquered the minds and hearts of the audience with a speech about the theory of chaos and its application in sensors and detectors.

“I am surprised! People are really interested. They come to the university in the evening and listen to lectures on the advanced achievements of science. When I entered ETU "LETI" in 2008, I didn’t have any special plans and understanding of how I would move on, but it was here that I found myself and now I understand that I always wanted to be a scientist.”

All participants received memorable prizes, and the winner was awarded branded boxing gloves of the project, confirming the title of the best “fighter” in Science Slam LETI.