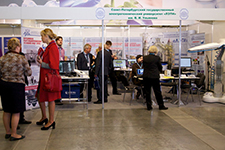 The famous European philosopher Bill Ridings in his book "University in Ruins" notes that commercialization of science, transformation of knowledge into goods became the main cause of the tragedy which today education goes through now. Is it true? VIII Petersburg international innovative forum which took place in October in "Expoforum" answered this and other questions.

By tradition the event began with plenary session which was opened by the governor of St. Petersburg Georgy Poltavchenko: "This forum is one of the main events of the Northwest region in the sphere of innovations. This year the main topic of the forum found its reflection in connection of key concepts of innovative activity: technological foresight, infrastructure and institutional support, demand and staff".

According to this message the main accent of discussions and round tables of the forum was made on assessment of the last technological decisions created by the Russian innovators, attraction of investments and innovative education in Russia and abroad.

During the interactive vote which took place at plenary session it became clear that the most part of participants considers education to be the most important thing for creation of innovative projects, and development of business remains only on the second place. Rector of ITMO Vladimir N. Vasilyev explained that in universities there have to be, first of all, business focused educational programs, also help of business partners in training of specialists is important. 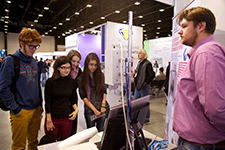 After plenary session the ceremonial opening of exhibition of innovative achievements followed. There it was possible to meet not only scientists - innovators, but also representatives of various enterprises showing the latest developments. So the group of “Chekhtreyd” turned into small cafe where everyone could get a glass of excellent Budweiser in exchange for business card. Representatives of ITMO laser center cut business card with laser on the polished metal plates. And  representatives of Polytechnical university suggested guests to make a virtual trip on a quadcopter, or to test system of laser scanning of volume objects for the subsequent creation of their computer model.

Not far there was the zone of startups: young scientists showed their projects waiting for investments.

The biochip races to rescue

Both well-known and new developments were presented at the stand of our university included in a cluster "Transmitting medicine". Among the first were the "clever clothes" created at Scientific Educational Center of Microelectronics and Diagnostics, bispectral optoelectronic sensor made for monitoring of procedure of a hemodialysis from Department of Quantum and Optical Electronics, a complex of sensors reporting about condition of the astronaut, installation developed in JSC ”ELTEH-Med” for X-ray pictures of animals. From novelties first of all it is necessary to mention “the laboratory on the chip” presented by Tatyana M. Zimina's team.

Biochip allows to analyze data almost instantly. For example, having taken blood test, it is possible to learn right there what bacteria live there, what speed do they have and to choose medicine.

Laboratory on the chip is a perspective direction of modern biomedicine, but Tatyana M/ team should start almost from scratch: to design component base, determine parameters which can further become usual help data. Now the group is faced by a task to create a microplatform on the basis of anode oxide of aluminum, having integrated into it a huge number of sensors. The principles of dynamic light scattering, recognition of bacteria, impedimetriya – measurements of resistance of samples are already fulfilled. By new year, on assurances of one of developers of laboratory Nikita Sitkov, installation is to be made.

The head of the youth innovative center of Science and Technology park of LETI Natalya N. Fomina told us about installation for terahertz and long-wave infrared therapy – the device "Infrateratron":

– This device differs from analogs that uses the radiation not of a near, but distant Infrared range which isn't reflected from tissues of the person, and passes on depth to several centimeters, – Natalya says about development. – Besides, all processes of exchange of energy between cages in an organism happen at the level of energy of the range chosen in the device that allows to stimulate the processes happening in an organism at the cellular level.

The device increases antioxidant activity that allows to use it to treatment of patients with the extensive thermal burns which earlier were considered as the hopeless. Also it helps with treatment of diseases of vascular and endocrine system.

– Moreover, by means of "Infrateratron" it is possible to get rid of an alcoholic coma, –Natalya adds.

Installation is being modernized, and, according to the Head of the innovative center, now the staff of Science and Technology park prepares mobile version for real-life conditions. 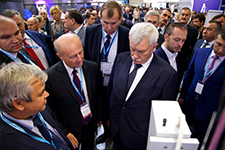 JSC “Ethel’ enterprise on the basis of Department of Computer Science and Engineering presented a novelty – the indicator of level of low-new AMD-01 aldehyde. It is an indicator of condition of oxidation of free radicals in an organism. And, in turn, it is possible to determine a large number of pathologies by quantity of oxidized free radicals. Due to application of small-sized spectrometer the device has the sizes not more then box of milk and can be installed in any laboratory. So far only two experimental samples made by request of MSU are made.

We breathe in a tubule

The emblem of LETI was met, however, not only on the installations presented in the university "corner" – we met pair of such devices at the stand of the Northwest federal medical research center of V.A. Almazov.

– Together with LETI we developed mobile system of disturbing alarm system for patients with coronary heart disease. When ischemia begins, it gives a signal on phone, forcing the patient to see a doctor, – the developer, associate professor of Department of Radio Engineering Systems and the employee of the Center Alexander Krasichkov says. – One more device is a portable mass spectrometer for diagnostics of a state of person’s health. After debugging of a technique it will be possible to make the diagnosis to the person who should only blow in a tubule.

During three days of Forum work more than 3800 participants from Russia and abroad took part in it. Hot discussions, summing up of competition of innovative projects, reports and presentations came to the end with the conclusion of a set of transactions and signing of seven international agreements, among which is  agreement on mutual understanding between Government of St. Petersburg and city of Tampere which governor Anna-Kaysa Ikonen attended a forum.

Also the forum answered a question whether domestic business and innovative science, in particular science of universities can come to understanding. The answer is affirmative, and success of such contacts depends equally on both parties.