One of members of LETI art studio – graduate student of Department of Computer Aided Design Artur Karimov teaches a robot to paint! 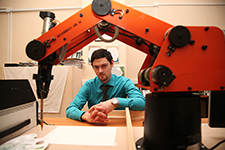 One of members of LETI art studio – graduate student of Department of Computer Aided Design Artur Karimov teaches a robot to paint!

SCORBOT-ER III robot manipulator is not a humanlike robot. This "iron artist" can be compared only with the human hand fixed on a support."Now the robot can write the etude! And it is not a limit, – says Artur. – After some time of study the robot will be able to work with a brush as Van Gogh or Repin".

LETI is a technical university therefore it is clear to everyone that it is a computer that operates the hand of the robot. Or rather computer program developed by Artur with active assistance of colleagues from Educational Scientific Center of technologies National Instruments. The robot "paints" as a true artist. At first he takes a brush in the steel "palm" consisting of two fingers, then turns towards a palette with paints, stops opposite to necessary one, picks up paint and puts short dab in a certain place of a canvas. Couple of hours passes, and the cloth is ready.

"It is not really difficult to make such a picture technically. Computers "are able" to print images." - says Artur. "The principle of work of our "painter" is similar: in the program developed by me processing of existing image and its transformation to a set of teams is put. But the algorithm of breakdown of the image on dabs and subsequent drawing up flowers of pure paints is unique. Thus the program solves a problem of a choice of necessary color on a palette and a place on a canvas where to make a dab and in what direction".

It was hard to teach the machine to work with paints. After all there are not four pure paints, as in the ordinary printer, but more than 40! So far the robot isn't able to mix paints and to receive necessary shades. After all the robot can't mix colors as the person, choosing "by eye" the necessary amount of this or that paint and adding it to the mixes which are available on a palette: for this purpose very difficult program of computer sight will be required. The robot assistant which is to appear soon will help to solve this problem. 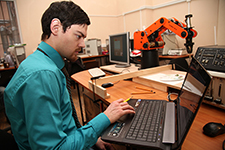 There is one more serious problem which hasn’t been solved yet. When dab lays down on the paint put earlier, its color changes. The saturation of color also changes from the beginning to the end of a dab. It means, the robot has to be able to estimate the work and to make necessary allowances, as the true artist. The task to make the robot one who can see is also being solved by Artur today.

Artur is sure that these tasks will be completed. After all he finished Faculty of Computer Science and Technology with diploma with honors and, being a student, became the author of a number of scientific publications. Secondly, he paints very well himself. "It is important, - he adds, – that in our laboratory there is a friendly and purposeful staff. With implementation of the project I was helped by the head of ESC Denis N. Butusov, assistant of Department of Computer Aided Design Valery S. Andreyev and student of Department of Computer Science and Engineering Evgenia Homitskaya".

At the beginning of December Artur's development became one of winners in competition on receiving a grant of "Participant of Youth Scientific and Innovative Competition" program ("UMNIK") which is carried out by Fund of assistance to development of small forms of enterprises in scientifically technical sphere. One of conditions of participation in it is commercialization of developments. "Thanks to communication with professional artists and collectors, – Artur speaks, – I know that copies of pictures of famous painters are in demand. The robot could create high quality copies. And his ability to paint portrait according to the photo is one more perspective market niche. It could become part of a unique online service on creation of picturesque portraits".

According to Artur, his project sholdn’t be separated from activity of ESC in general. "The main direction of scientific work of our center is connected with development of numerical methods for modeling and operating systems of real time. My thesis is connected with automation of design of similar systems. But we are developing, and natural continuation of our researches is transition to studying of cyberphysical objects. The robot artist is our first serious project in this area which combines in itself both scientific importance and commercial potential".