On October 28 – 30, 2015 I All-Russian scientific conference on problems of management in technical systems (PUTS-2015) took place at "LETI". 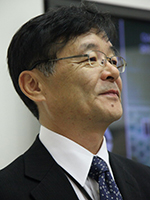 On October 28 – 30, 2015 I All-Russian scientific conference on problems of management in technical systems (PUTS-2015) took place at "LETI" with assistance of Committee on science and the higher school of St. Petersburg Government. Head of the organizing committee is CEO of GNTs Russian Federation JSC Kontsern Central Research Institute Elektropribor, academician of the Russian Academy of Sciences Vladimir G. Peshekhonov. Also members of the committee are leading Russian scientists in the field of control systems. 140 people from 30 cities of Russia, and also representatives of universities of Great Britain, Germany, Kazakhstan, Latvia and Japan took part in the action.

Reports of conferees were devoted to such questions, as:

In the first day of work of the conference ceremonial opening of scientific and educational laboratory of systems and automation equipment of dynamic objects of Mitsubishi Electric took place. Vice rector for research of LETI Mikhail Y. Shestopalov and the CEO of Department of Technical support and International Department of Marketing of Mitsubishi Electric corporation Mr. Tokunaga Masaki took part in it.

On October 29 youth school seminar of A. A. Vavilov was held within the conference. It focused on the young scientists, graduate students and masters specializing in area of control systems of difficult dynamic objects of various physical nature.

Following the results of youth school seminar the best reports which will be published in the magazine "Izvestiya SPbGETU «LETI»" were recognized the following works:

Conference on problems of management in technical systems is planned to be held every two years with the invitation of the leading scientists. For increasing of prestige of this event it will be offered to conferees to prepare scientific articles for the collective monograph representing results of researches on control systems of difficult objects.