Project created with the participation of LETI beacame the best 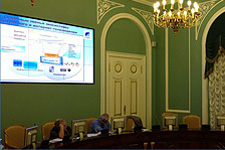 Project "Digital Sphere —Finnish-Russian Ecosystem Broadcasting and Internet Television" created with active participation of LETI became the best among projects of St. Petersburg on the Priority No. 1 of the program "European Instrument of Neighbourhood and Partnership, Southeast Finland — Russia, Border Cooperation, 2007-2013" and was awarded by Administration of St. Petersburg, and also the Ministry of Economic Development of Russian Federation. LETI acted as a leading partner of consortium from six Russian and Finnish participating organizations.

The project "Digital Sphere — the Finnish-Russian Ecosystem of Broadcasting and Internet Television" was implemented within the Cross-Border Cooperation Programm within the European Instrument of Neighbourhood and Partnership "Southeast Finland – Russia" (2007 - 2013) on priority "Economic development". The essence consisted in creation of convenient menu of telecasting and information services for comfortable obtaining of information by Russian-speaking tourists and businessmen in Finland. The main goal was to promote economic development of Russian-Finnish relations.

Project coordinator, Dean of Faculty of Radio engineering of LETI professor Victor N.Malyshev said: "For us this cooperation had huge value. For the first time LETI became the leading partner of the project of such significance. We did a great job: created the Scientific and Educational Center "Digital Telecommunication Technologies", held a set of seminars with representatives of the industry and providers, participated in a number of exhibitions. Besides, as the leading partner, LETI prepared all financial statements. Creation of a platform for communication and receiving experience of joint activity became the main thing in this work. We held several dozens of meetings where working moments were discussed". Victor N. Malyshev noted a big contribution to the common cause of employees of LETI: associate professor of Radio Electronic Facilities Igor Y. Pivovarov, senior teacher of Department of Foreign languages Maria A. Kiselyova and Deputy of Chief accountant Natalya V. Suchkova. 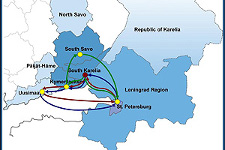 Another partner from the Russian side was JSC Plant of Kozitsky that acted as a platform for communication of partners, and also the Committee on informatization and communication of the Government of St. Petersburg which played a contact role, carrying out information support of the project. Together with LETI Petersburg partners concentrated on researches in the sphere of digital technologies and opportunities of their application. They developed digital reception television equipment, conducted development in the field of subscriber and linear telecommunication equipment, including uninterruptible power supplies for telecommunication equipment for extensive market of the Northwest of Russia and other regions. The important place was taken by market researches on the basis of the scientific analysis and modern methodologists. Activity of the Finnish partners of Teknologian tutkimuskeskus VTT, Maxisat-yhtiöt Oy and Kouvola Innovation was directed on research of development of electronic media and multimedia equipment; studying of questions of providing of language services in a border zone.

Awards – diplomas and a memorable sign  were handed at the XIV All-Russian forum "Strategic planning in regions and the cities of Russia: space of a choice and choice of space" on October 20, 2015. The forum has been held annually since 2002 and it is considered as the main platform for discussion of methods and mechanisms of strategic planning and constructive discussion on the most important and sensitive issues of implementation of strategic plans and complex projects of development of the cities and regions of Russian Federation.