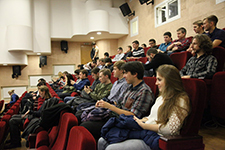 Youth School-Seminar "Problems of management in engineering systems" was held on October 28 at Saint Petersburg State Electrotechnical University "LETI". The meeting was opened by Head of Department of Automation and Control Processes, Vice-Rector for Research of LETI M.U. Shestopalov who noted that this event takes place at the university for the second time. In comparison with the last year format of youth school changed, in its work representatives of universities of other cities take part, and in future it will be held annually at the end of October.

Youth Workshop was named after outstanding scientist, Corresponding Member of the USSR Academy of Sciences, Professor, Doctor of Technical Sciences Alexander A. Vavilov. For more than 15 years (from 1968 to 1983) he was rector of LETI. His colleagues and students remember him not only as unconditional authority in management of technical systems, but also as a man who loved and knew how to work with young people. This Workshop is intended as a tribute to respect, memory and continuation of tradition of working with youth pledged by A. Vavilov and is aimed primarily at young scientists, graduate students and masters.