Order of Friendship of Vietnam 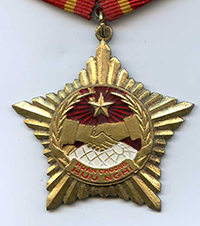 According to the decree of President of the Socialist Republic of Vietnam on October 21, 2014 Saint Petersburg State Electrotechnical University “LETI” was awarded the Order of Friendship for active longlasting contribution to the training of highly qualified personnel for Vietnam, for promotion of friendship and cooperation between the Socialist Republic of Vietnam and the Russian Federation.

Ceremonial presentation of the Order was held on November 6, 2014 in Hanoi University of Science and Technology at the meeting dedicated to the 50th anniversary of the university cooperation with Vietnam. In the celebrations delegation consisting of Rector Vladimir M. Kutuzov, Vice-Rector for International Affairs Victor A. Tupik, Dean of Faculty of Computer Science and Technology Mikhail S. Kupriyanov, and Head of the Department of Biotechnical Systems Zafar M. Yuldashev will take part.

Training of specialists for Socialist Republic of Vietnam at the ETU is conducted since 1964. Over 50 years of cooperation more than 700 people took training at LETI, more than 50 Vietnamese citizens defended theses. Since 2003 joint educational program of Hanoi University of Technology and ETU "Computer Science"is realized in which 445 people received bachelor's degrees.

In the mid 90s a new stage of cooperation between LETI and universities of Vietnam started: since 1996 "LETI" has collaborated with the Technical University of Le Quy Don, within which training of highly qualified personnel for a variety of educational disciplines is conducted.

In 2011 the cooperation agreement between the ETU "LETI" and International Relations of the Ministry of Education and Training of Vietnam (VIED), which marked the beginning of a new phase of training of Vietnamese entrants at LETI, was signed. As a part of the contract "LETI" holds meetings with potential applicants, informing about the directions of education and other important aspects of university life.

Since 2012 ETU "LETI" was included in Vietnamese-Russian University of Technology (VRTU) on proposal of Technical University of Le Quy Don and since 2013 began training of students in the framework of directions VRTU radio engineering and instrumentation, including internships of Vietnamese teachers at the ETU.

In May 2013 an agreement on cooperation with the Hanoi University of Technology under the Hanoi National University, aimed at cooperation in the sphere of information security and telecommunications, was signed. In prospect the creation of "Russian-Vietnamese Information Security Center and security of computer networks" is planned.

Currently 45 representatives of Vietnam are trained at ETU "LETI" in different directions.