University / News / On the16th of March is birthday of A.S. Popov

On the 16th of March is birthday of A. S. Popov

The 16th of March is birthday of famous Russian scientist, electrical engineer and radio inventor A. S. Popov. 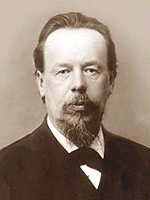 It’s no accident that the street, where the ETU is situated, is named after A.S. Popov. He influenced not only world scientific activity but also left the imprint in the history of Electrotechnical University.

Alexandr S. Popov made ​​a huge contribution to the development of physics and electrical engineering, he created radio communication system and coherent detector capable of receiving electromagnetic signals over a distance. Alexander Popov constructed the first X-ray machine at Navy in 1896. A lightning rod applied by Popov became the world's first radio network receiver. Merits of A.S. Popov were marked both by the state and scientific and public organizations.

Popov’s business dealings with Electrotechnical Institute of Emperor Alexander III (the first name of the ETU – author’s note) began in 1897. The same year at the meeting of Russian Physical and Chemical Society, with the help of Hertz dipole and receiver of his own design, Popov radioed the first Russian radiogram "Heinrich Hertz" over a distance of 250 m. Some years later in 1901 he was appointed as professor of Department of Physics, and in 1905 he was made the official director of ETI. A.S. Popov demonstrated the first techniques of electrical engineering education that inspired his followers A. A. Petrovsky and N. A. Skritsky. They improved the structure of radio engineering education, and in 1916 speciality "radiotelegraph stations" was opened.

Memorial flat of A.S. Popov, which contains original documents and instruments, was opened in building 1 of LETI in 1948. In museum - laboratory visitors can see ingenious inventions and works of the scientist. In 2005 the International Institute of Electrical and Electronics Engineers (IEEE) fixed a memorial plaque commemorating the invention of radio.