On the 11th of October, 2012 an Italian particle physicist Carlo Rubbia held a lecture on Climate changing and Enviroment in LETI. In 1984 Carlo Rubbia shared the Nobel Prize in Physics with Simon van der Meer. 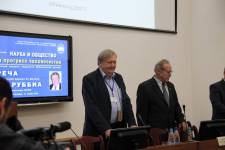 On the 11th of October, 2012 an Italian particle physicist Carlo Rubbia held a lecture on Climate changing and Enviroment in LETI.

In 1984 Carlo Rubbia shared the Nobel Prize in Physics with Simon van der Meer for work leading to the discovery of the W and Z particles at CERN (The European Organization for Nuclear Research). In 1989 he was appointed Director-General of the CERN Laboratory and was holding this post till 1993.

According to the scientist, the climate and the average temperature of the Earth have changed substantially for a number of reasons. But the most significant cause of these changes consists in negative effects of the increasing amount of carbon dioxide due to anthropogenic activities. 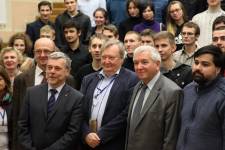 Over the last 80 years the world population has tripled, and respectively energy consumption and the level of environmental contamination have increased dramatically. Nuclear power plants provide only about 6% of the world's energy today. So, more environmentally friendly renewable energy resources have to be discovered, as well as new high-technologies. And the faster it is done, the better future we have because the climate is changing rapidly.

Carlo Rubbia was asked what would happen if Arctic sea ice melts. The scientist believes that in this case Sea level will rise 10 m. And the melting of ice in Antarctica will lead to a 100 m sea level rise. In the Siberian tundra where the soil is mostly frozen there is a lot of methane. If the soil starts to melt, this methane will leak out into the atmosphere and enhance greenhouse effect. Then the global warming process will go faster. 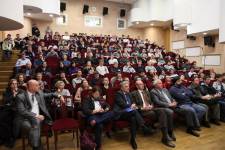 Over the last years having Nobel Prize laureates as guests at LETI became our tradition. We are grateful for that to Zhores Alferov who graduated from LETI and was the winner of 2000 Nobel Prize in Physics. It was our honor to host Ivar Giaever, Alan J. Heeger and Roger David Kornberg in St. Petersburg Electrotechnical University. Every such visit is a big event for students, lecturers and professors.