On September 1, 2015 new school year started at LETI. This year will be special because of anniversary of LETI which will turn 130 years old next summer on June 15. 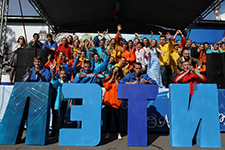 On September 1, 2015 new school year started at "LETI". This year will be special because of anniversary of LETI which will turn 130 years old next summer on June 15. On the Day of Knowledge freshmen opened an important page in their professional life taking part in traditional ceremony of dedication into students. During the warming up masters of ceremonies greeted freshmen, students made photoes near the large letters “LETI” and at the special stand with portraits of outstanding scientists of our university such as N. G. Pisarevsky, A. S. Popov, I. G. Freiman, P. D. Voynarovsky and others.

"You entered LETI, and this is a very good choice! On this festive day I want to wish you to have the second holiday in several years  - diploma delivery ceremony! The years that you will spend at our university will always remain the best in your life! I hope you all will become professionals, make a family, because families created at LETI are the strongest. And, of course, I wish you all to become true patriots of our country. It needs you and lays hopes on younger generation. I am sure that some of you will become famous scientists, educators, politicians, "- said ETU Rector Vladimir Kutuzov.

"With all my heart I thank all the teachers who helped me to succeed. In 1998, I was standing on the same line. I entered Department of Microelectronics and never regretted my choice. When I come to any region I see graduates of LETI. These are men of worth, and education, which is given here, is very much in demand, "- said Director General of ELTECH Alexey V. Troshin.

First-year students, who entered LETI with the highest scores and significant achievements, got student IDs and union cards from the hands of Deans of the faculties and Chairman of Trade Union Committee Dmitry Fedosov on the stage and then took part in an intellectual game.

In the final part of the event foreign students gave welcoming speech and sung in Russian.

The holiday finished by traditional "closing a circuit" of students and teachers - holding hands, they chanted "We have the contact!" for three times.