The innovative technology of material creation for photovoltaics will help achieve the record-breaking efficiency of solar cells.

Solar power is a promising and popular field of research as one of the types of renewable energy sources. The existing high-efficiency multi-junction solar cells have already approached their theoretical limit in terms of efficiency, so today's world scientific community focuses efforts at creating and implementing more efficient and cost-effective approaches to their production.

One of the directions of photovoltaics is the creation of lattice-mismatched A3B5 solar cells on a silicon substrate. However, this approach has a significant disadvantage – a high dislocation density in the devices due to the mismatch of lattice constants leads to poor quality of A3B5 compounds layers and their substantial degradation, which limits their use for photovoltaic conversion of solar energy.

Alexander Gudovskikh, Professor of the Department of Photonics of St. Petersburg Electrotechnical University "LETI," suggested a solution to this problem. His team published the results of the research in the journal Physica Status Solidi (a) – applications and materials science.

The approach proposed by the ETU "LETI" researcher uses silicon substrates formed by combining atomic-layer deposition technology at the initial stage of growth using the metalorganic vapor phase epitaxy (MOVPE). Its key difference from previous approaches is the growth of the nucleation layer carried out by the plasma‐enhanced atomic layer deposition (PE‐ALD) at relatively low temperatures with subsequent epitaxial growth of the upper junction based on A3B5 quantum-sized structures using MOVPE.

"The existing methods of photocell formation use high-temperature (900-1000 °C) annealing of the silicon substrate at the initial stage of growth for oxide removal and surface reconstruction, which further leads to lifetime degradation in the substrate."

The new technology allows reducing the temperature of epitaxial growth of GaP on Si substrates to 600-750 °C, as well as the formation of GaP/Si structures with GaP nucleation layer by PE‐ALD at a temperature of 380 °C. 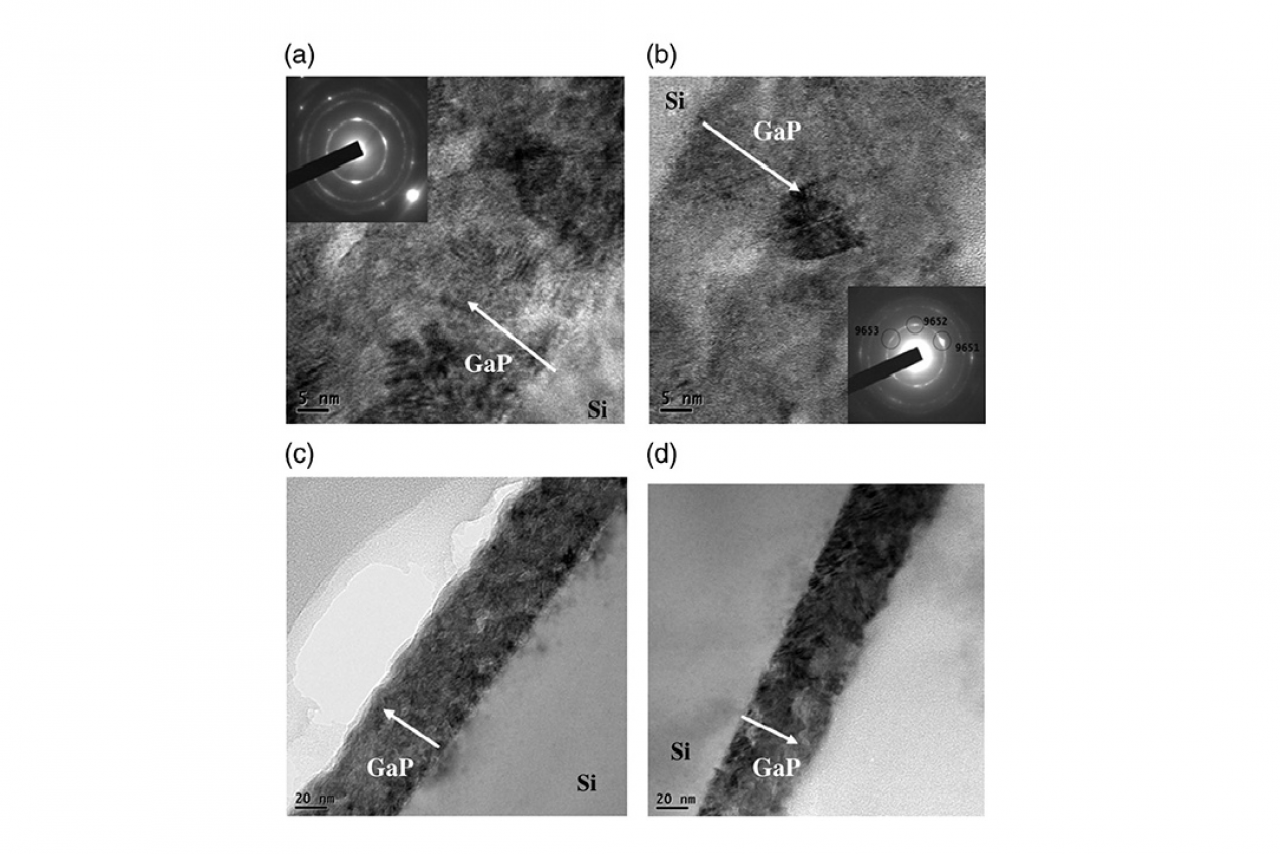 Studies of structural and electronic properties and temperature stability of the new material proved that GaP/Si structures obtained by PE‐ALD without additional hydrogen plasma exhibit better photoelectric properties compared with that fabricated with high H2 plasma power that induces the formation of defects in the silicon subsurface layer. "Annealing at temperatures of 550–600 °C leads to a decrease in the defect concentration created by the hydrogen plasma. Thus, after annealing, the GaP/Si interfaces fabricated by both types of PE‐ALD processes exhibit similar quality. Thermal treatment of the GaP/Si structures at temperatures of 725–750 °C leads to the diffusion of phosphorus from GaP into Si and to the formation of an isotype n‐GaP/n–p‐Si heterojunction with improved photoelectric properties," Alexander Gudovskikh comments.

The new GaP epitaxial growth technology on Si substrates will increase the efficiency of double junction solar cells to record-breaking values: over 30% for AM0 non-concentrated radiation and over 35% for AM1.5D concentrated radiation. The high efficiency and optimal cost of the new technology offer wide application prospects: from solar energy elements installed on the Earth's surface to a spacecraft power supply.

The work was carried out jointly with colleagues from the Academic University or Alferov University, Ioffe Institute, and the Paris-Sud University (France) and funded by a grant from the Russian Science Foundation.

In 2018, the Department of Photonics launched a master's program on Renewable Solar Energy, where students can master modern solar energy technology and learn the main principles of photovoltaics. It gives insight on underlying physical principals and materials science aspects of photovoltaics, solar module development technology, the equipment, design, and maintenance of solar power plants.