Traditional initiation ceremony of "LETI" freshmen was held on September 1st, on the Day of Knowledge. 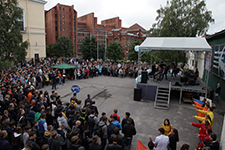 Traditional initiation ceremony of "LETI" freshmen was held on September 1st, on the Day of Knowledge. New students of LETI could feel like at home since the very morning: at the entrance to building 5 there was music, students were met by mimes, volunteers handed out bracelets with the logo of our university, and in the courtyard of building 3 rock band played for the crowd.

After reciting of the student oath the ETU Rector Vladimir M. Kutuzov greeted the students, "Today you will become students of LETI, which is the oldest university of electrical engineering in the world, as well as one of the leading universities in Russia. I hope that among you there are students who in a few years will become professionals and create new glory for LETI. I wish you successful start because your whole future study depends on the first semester”.

Then raising of the university flag was held to the strains of ETU hymn. The main doers were:

3rd year student, champion of the Republic of Komi on weightlifting, medalist of Saint-Petersburg weightlifting and powerlifting championship Sergey Kuznetsov,

2nd year student of MA course, chairman of student council of hostel №4, winner of the " LETI student of the Year" in nomination "The best hostel captain" Tatyana Filippova.

After welcoming speeches deans and Chairman of Students Union Dmitry Fedosov handed student tickets  to freshmen with the highest scores and great achievements, and then students and deans participated in the intellectual game thereby passing the preliminary session.

In the final part of the event winners of the fifth and sixth seasons of the Festival of Arts "Step on the stage" Margarita Demina and Ekaterina Fokina performed with items on Rhythmic Gymnastics. Students from China Yin Shuai and Dai Ya Wei demonstrated their success in learning Russian language. Club of the Funny and Inventive team amused the audience with sketches about everyday life.

At the end of the holiday students and teachers by tradition "made a circuit" holding hands together and chanted "We have the contact!" for three times.