Meeting of graduates from Vietnam

On September 3, 2015 meeting of graduates from Vietnam was held at ETU "LETI". 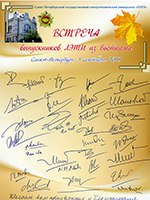 On September 3, 2015 meeting of graduates from Vietnam was held at ETU "LETI". Thirty years after finishing their study in Russia nine Vietnamese alumni, who managed to realize themselves successfully in their professions, have organized a trip to our country to share memories of the years of study, walk around the campus, visit the hostels where they lived and prepared for exams, as well as to meet with the teachers.

The official part of the visit included a meeting of graduate of Department of Marine Control systems Nguyen Manh Hoa and his family with ETU Rector Vladimir M. Kutuzov. Then in the dining room of building 5 solemn part of the event started. It was organized by the representatives of current Vietnamese students together with the administration of the University.

On the part of LETI meeting was attended by the Head of International Relations Department Maria V. Pavlovskaya, Vice-Rector for International Relations Victor A. Tupik, Head of Postgraduate study Alexey A. Pogodin, Vice-Director of Institute of Continuous Education Stanislav E. Gavrilov, Head of Department of Marine Control Systems Professor Yuri A. Lukomsky and its graduates.

The following Vietnamese alumni arrived to LETI with their families:

During the festival opening speech was made by V.A. Tupik and Y. A. Lukomsky. Nguyen Manh Hoa and Le Anh Vu imparted their happiness from the meeting. Students from Vietnam, as well as graduates and their families sang a few songs in Vietnamese and Russian, including songs, dedicated to the first president of Vietnam Ho Chi Minh, and songs in honor of the 75th anniversary of Vietnam's independence, which was held on the eve of the celebration. At the end of the meeting one of Vietnamese graduates masterly performed guitar Soviet songs of 70th years of XX century.