St. Petersburg powerlifting championship among universities was held in athletic training hall of the ETU from 4 to 6 April. 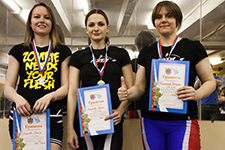 St. Petersburg powerlifting championship among universities, which was attended by 122 people from 21 university of the city, was held in athletic training hall of the ETU from 4 to 6 April.

LETI girls made a huge contribution to the final victory of our team of high school winning three gold medals. In the weight category up to 52 kg the first place was taken by Anna Petkova, the second by Angela Musaeva (North-West Institute of Management), the third by Daria Suyazova (Saint Petersburg State University).

On the second day of the championship in the weight categories up to 74 and 83 kg representatives of the ETU didn’t win any medals. On the final day of the competition Sergey Kuznetsov took the third place in the category up to 120 kg with a score of 545 kg.

In the team competition LETI was the winner, St. Petersburg State Polytechnical University was the second, and the third was Pushkin Leningrad State University.

Congratulations to our champions!