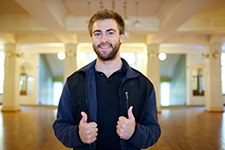 Forrest Kucher, twenty-two year old graduate of Bachelor’s programme of USA Colorado University, decided to continue his studies at St. Petersburg State Electrotechnical University "LETI". Forrest told the reporter of «Electric» why he decided to chose LETI, why he is interested in Russian history, what are differences and similarities between the Americans and the Russians and many other things.

- Forrest, and yet, why Russia? Why Saint-Petersburg?

- Although my family did not do with Russia I was always interested in history of your country and the Soviet Union. It is very rich and very controversial, it has a lot of steep, unexpected twists and dramatic moments, especially in the twentieth century. To study the history of the country it is necessary to know its language. So at the University at the same time with the course of history I learned your language, and a lot of Russian teachers, who worked in Colorado, helped me with this. The program includes language training at the State University of St. Petersburg. Two years ago I spent in your city the whole semester along with dozens of my fellow students. I lived in an ordinary family in St. Petersburg in their apartment near the Institute of Technology. It was very useful for language practice and for preparation of the thesis.

- And what was it dedicated to?

- To the analysis of opinions of Americans about the Soviet Union in 1939-1949 and state of economical situations of both countries during this period.

- So, you're interested in how our country was able to defeat Nazi Germany and quickly rebuild their economies?

- When my family and friends found out that I would go for an internship in St. Petersburg many of them were afraid for me. Sadly, in America many believe that Russian do not like Americans. I tried to reassure my parents but they are still worried. It was only when I came back, it became clear that all the fears were groundless.

- And what is the secret of Russian victories?

- Very well-organized economy, heroic, selfless work of Russian women and children in the rear and in the factories. They did not feel sorry for themselves for the sake of victory. In this regard it differed little from the theatre of war.

- Is this the opinion of Americans?

- Yes, in those years most Americans have respect for the contribution of your people to victory over the common enemy.

- And what was the impression of modern Russia?

- I liked St. Petersburg very much - the city is absolutely different from our American cities. Absolutely stunning architecture! How lucky you are to live in such a beautiful city. And first impression from citizens was not very good. Clothes is mostly black and dark, very few people smile, they are too concentrated. It annoyed me very much that they go too slowly in the subway. It was later when it became clear that the appearances are deceitful. Petersburgers turned out to be very cheerful and helpful people. In many ways similar to us. They treat Americans and other foreigners in a good way.

- What souvenir did you bring home from Russia?

- Samovar. Russian dolls are well-known in America, but samovar has never been seen before. It was a sensation!

- What made you come back to St. Petersburg?

- There were a lot of reasons. After graduation I started to work in Seoul, Korea. But I did not like it, and soon I realized - I must go to Russia again, improve my language, get to know the country and its people. And then I really wanted to see St. Petersburg again. Moreover I have friends there who could help me settle in the city.

- Colorado - Seoul - Petersburg - almost a world tour! Do your parents help you with money?

- No. In Seoul I earned enough. And here I started tutoring. Agency helped me to find families where English speaker for practice with children was needed. So once I met with Andreev family, where I gave lessons to a four-year old boy Kirill. I was very fond of the boy and in general made ​​friends with this Russian family. Besides I seldom meet with friends whom I met in my first trip. They are quite busy people, many of them have their own business, and I have a little free time too. If I have it I wander along the city and admire it. I like Tavrichesky Garden and surrounding streets most of all. This is a real unique Petersburg!

- It’s clear about friends, but what about girlfriend?

Yes, I have a girlfriend. I met her on the street during one of my walks. Alina is a translator. She has very beautiful big blue eyes. They hit me so that I immediately said in Russian: "What beautiful eyes you have!". That’s how our friendship began.

- Today you study on MA course at LETI, gain knowledge in management. We assumed that such education is best to get in America.

- There are a lot of stereotypes in the world. And this is one of them. Of course universities of America give very good education. But leading universities of Western Europe, Japan, Russia and many other countries are not worse. In the United States diplomas of the best Russian universities are treated with respect. And graduates of your technical colleges have no problems in finding well-paid jobs. But for me – I am historian with a bachelor's degree of one of the best universities in the United States – it’s difficult to find a job. So I decided to get another profession.

- Mother of Kirill – Angela, asssociate Professor of the University, told me a lot about it. Of course I made ​​inquiries about the university myself. I am sure that with LETI diploma I will not have problems with employment either in Russia or in America or anywhere else.

- What are the peculiarities of learning in Russian university?

- In Colorado many classes were taught with the use of personal computers. And teachers made their lectures in the form of a dialogue, direct communication with students. Here lectures are given in a more traditional style. Nevertheless teachers here are very skilled.

- And in the end the traditional question: what are your plans for the future?

- I want to graduate form LETI successfully, open my own business in St. Petersburg so that representatives of American and European firms could become my clients. I would like to have a family here. I haven’t decided how long I will stay in Russia, time will show it. But I will not lose the passion for the history of your country.