On March 15, 2015 the honor of our university, LETI graduate Zhores I. Alferov, who is an outstanding Soviet and Russian physicist and Nobel Laureate in Physics turned 85 years old. 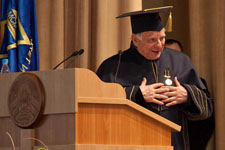 On March 15, 2015 the honor of our university, LETI graduate Zhores I. Alferov, who is an outstanding Soviet and Russian physicist and Nobel Laureate in Physics "for developing of semiconductor heterostructures and for establishment of fast opto- and microelectronic components", turned 85 years old.

Zhores Alferov was born in Vitebsk. After 1935 his family moved to the Urals. On May 9, 1945 his father, Ivan K. Alferov, was appointed to Minsk, where Zhores graduated from the male high school №42 with a gold medal.

He became a student of the Faculty of Electronic Engineering of Leningrad Electrotechnical Institute (LETI). When he was a third-year student he started to work in a vacuum laboratory of Professor B.P. Kozyrev. There he started experimental work under direction of Natalia N. Sozina. So in 1950 semiconductors became the main cause of his life.

Zhores Alferov is Full Cavalier of the Order "For Merit to the Motherland". He has dozens of high state awards, including foreign ones. He is the author of over 500 scientific papers, three monographs and 50 inventions.

Alferov's motto is "To strive and to look for, to find and not to give up!". All his life he followed this wonderful principle of the real researcher. We wish him many years of successful scientific activity, new ideas and talented students!