Large-scale street dance championship "Hip Hop International - Cup of Russia 2014" was held in Moscow from March 28-30. The guys from Modern Step dance studio decided not to miss the opportunity to show themselves on big stage. 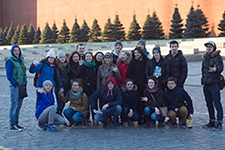 Large-scale street dance championship "Hip Hop International - Cup of Russia 2014" was held in Moscow from March 28-30. The guys from Modern Step dance studio decided not to miss the opportunity to show themselves on big stage. The team arrived to Moscow early in the morning on March 28. The next day our dancers showed their items to the global judges from the United States, Trinidad and Tobago, Canada, France and Hungary.

On the eve of the performance day the guys gathered strength and morally prepared for the important day walking all over Moscow. Everyone loved the hostel, its atmosphere, location and unique, modern design that inspired and caused only positive emotions. Moscow seemed to be enormous, with endless tunnels of the underground and wide streets. Karina Polishchuk, a student of Computer Science and Technology Faculty and a member of the team FullHouse, was delighted with the Stalin skyscrapers. Angela Koshutina , a student of Radio Engineering Faculty, admired extensive buildings of Moscow State University. Everyone certainly enjoyed beautiful view from  Vorobievy Hills.

Guys relaxed a bit, rested and gathered their thoughts and forces to show themselves on top and not to lose face, because their rivals were the strongest dance groups from Petersburg, Moscow , Ekaterinburg, Penza , Ryazan and other cities of Russia. At the festival there was return of the legendary Moscow team Doberman, which had existed for over 10 years. But it did not break the morale of our competitors, and there were 21 of them in three teams - WAKApeople, LCA and FullHouse. They were in the category of Adults, where there were 49 teams. Egor Balashov, team’s coach and founder of modern dance studio in LETI, said: “We have always prepared competition for two teams, but this time there were three of them as we exceeded the limit - 8 people per team. Thus, due to the championship a new team FullHouse was created.”

"Semi-final of HHI turned out to be very an entertaining and awesome show," - shares his impressions Egor . And this is not surprising, because the first festival was held in 2007 and since then it has become the most recognizable and anticipated event in the world of Russian street culture.

On the championship our guys didn’t manage to take prizes, but nevertheless they showed themselves at the highest level. "We all got a lot of our performances. Our strengths and weaknesses became clear", - concluded Egor Balashov. Participants of all teams were satisfied even without the Golden Cup.

We don’t know what expects our dancers in future, it is impossible to know for sure. But no doubt if one has irresistible desire to evolve and improve, he will soon be able to raise the cup over his head!