University / News / KazNTU postgraduates were on probation at the “ETU”

KazNTU postgraduates were on probation at the “ETU”

A group of 13 postgraduates of Kazakh National Technical University after Satpayev came on probation to the ETU on "Solar Photovoltaic Heterostructure" program from 24 to 31 March. 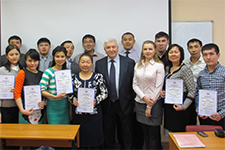 A group of 13 postgraduates of Kazakh National Technical University after Satpayev came on probation to the ETU on "Solar Photovoltaic Heterostructure" program from 24 to 31 March. In concurrence with KazNTU, sessions were devoted to the topic of "Physics and technology of manufacturing thin film heterostructures for photovoltaics" which is relevant nowadays in connection with the development of solar energy industry in Kazakhstan.

Internship was held on two platforms. Department of Quantum and Optical Electronic devices conducted lectures on physics and metrology of solar modules supported by cycle of lab practicals. In TF TE Ioffe R&D Center internes met with actual production of thin film solar modules. Modern equipment, delivered to Russia by the Swiss company Oerlikon Solar, was demonstrated to the postgraduates. Nowadays the Center is compliant with international standards of production of solar modules.

Classes were conducted by teachers of Quantum and Optical Electronic devices Department - Professor A.M. Vasilevsky, associate professors G.A. Konplev, A.S. Gudovskih and V.A. Parfenov, and TF TE staff - doctor E.I. Terukov and Ph.D. E.E. Terukova. "We have big experience in joint advanced training. Over the years of work we have formed a team that specializes in this area. Totally only this school year about forty persons were on probation on solar energy, so the program of classes is worked through,"- said Head of Department of Quantum and Optical Electronic devices, Ph.D. Valentin P. Afanasiev.

"The group that came to us from KazNTU was extremely active and inquisitive. Moreover, they showed high level of training in this area, so it was interesting and quite simple to work with them. During the seminars and the final interview we have received positive feedback on the training program and its implementation, and all participants got certificates confirming successful completion of training at the ETU," - says V.P. Afanasyev.

Also the professor mentioned that LETI employees have the desire to continue not only educational, but also scientific contacts with KazNTU in solar energy. The basis to it is a cooperation agreement, signed on November 21, 2013 between the ETU "LETI", Ioffe Phisycal Technical Institute and the Kazakh National Technical University after Satpayev. "I am very grateful to professor Serik E. Kumekov who did much for the signing of this agreement, under which we are actively cooperating. In the frameworks of the agreement an application for state quotas for training in the MA cousre of the ETU for foreigners in areas of training at the University of the Shanghai Cooperation Organization, we are working on a joint project of forming technology and study of properties of oxide heterostructures for solar energy. Nowadays on the line of Shanghai Cooperation Organization there is a postgraduate student on probation from KazNTU, who conducts research with our young scientists. Due to the joining of forces in the educational and scientific fields with Kazakh colleagues we are able to enrich each other mutually,"- says V. P. Afanasyev.