On June 1, 2015 eight graduates of Almaty University of Power Engineering and Telecommunications have received certificates of scientific internship at ETU "LETI". 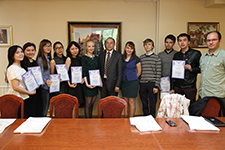 On June 1, 2015 eight graduates of Almaty University of Power Engineering and Telecommunications have received certificates of scientific internship at ETU "LETI" on program of academic mobility "Biotechnical Systems and Technologies".

During 72 academic hour–internship students from Almaty attended lectures and participated in seminars and laboratory works on promising areas of biomedical engineering, synthesis methods, calculation and design of medical equipment. Some classes were held at the base department of "Medical Information and biotechnical systems" located in the North-West Federal Medical Research Center of V.A. Almazov where the trainees were able to get acquainted with the technical equipment of one of the most advanced medical institutions in Russia. Internship also includes extensive cultural program with a visit to all areas of the museum complex of ETU "LETI".

It should be noted that this group of AUPET undergraduates is the third that comes to LETI. Such internships are annual. However, this cooperation has very deep roots. For example, Professor of Department of Engineering Cybernetics of AUPET Svetlana G. Khan is a graduate of LETI Department of Biomedical electronics 1978. Moreover, in 1985 it was in LETI where she wrote and defended her PhD thesis. Taking into account further cooperation, scientific supervisor of internship Zafar M. Yuldashev tried his best to attract young teachers of the Department to carrying out of internship. Along with experienced professors, students were given classes by teaching assistants Alexey Anisimov, Evgeny Pustozerov, Anna Y. Glazova, Anna S. Vedenina, young PhDs Gleb A. Mashevsky and Andrew Y. Aksenov.

"We were very happy to come to St. Petersburg. LETI  is a very respected university. We cherish memories of St. Petersburg. The city keeps its history, people here are very hospitable, literate and educated "- shared his impressions undergraduate of AUPET Moldir Orazalinova.

Teachers who participated in the internship, also enjoyed communicating with students, noted their good technical training, erudition and interest in development of a new field of science.

Currently, ETU "LETI" has about three hundred undergraduate and graduate students from Kazakhstan. Programs of academic mobility between LETI and Kazakh universities are actively developing, and on March 27, 2015 international meeting "Flight to Kazakhstan" was held at the university.