University / News / In memory of I. G. Freyman

In memory of I. G. Freyman

The current May is full of anniversaries connected with the history and development of the radio. One of them is the 125th anniversary of the birth of outstanding scientist I. G. Freyman. 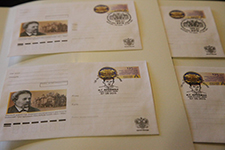 The current May is full of anniversaries connected with the history and development of the radio. One of them is the 125th anniversary of the birth of outstanding scientist, one of the founders of the national radio, the initiator of scientific and engineering approach to solving its practical problems, founder of the first in the country Department of Radio Engineering, Professor of LETI I. G. Freyman who is called the direct follower of A.S. Popov.

On May 7 at the Central Museum of Communications of Popov the eighth scientific readings dedicated to the memory of A.S. Popov and Radio Day were held. A report on research activities of Imant G. Freiman (05.01.1890 - 08.02.1929) was made by director of Memorial flat of A.S. Popov Larisa I. Zolotinkina.

Facts, given by Zolotinkina, prove that he made a big contribution to the national Radio engineering. Here are the most important ones. He was a graduate of St. Petersburg Electrotechnical Institute, I. G. Freyman, Professor of LETI, head of Russia's first Department of Radio Engineering (1917-1929), founder and head of Department of Radio communications at the Naval Academy (1922-1929), professor at the Military Academy of Engineering ( 1922-1928), scientific consultant, member of the Technical Council for Radio of Trust factories of weak current and Central Radio Laboratory (1922-1929), scientific consultant of Scientific testing station Commissariat of Posts and Telegraphs (1922-1928). I. G. Freyman was the first chairman of the section of communications and surveillance of Scientific and Technical Committee of Naval forces of the Red Army (1924-1927), the initiator and leader of development of the first system radioarmament of fleet "Blockade-1" which was the basis for two next-generation of naval radio. Larisa I. Zolotinkina emphasized that these radios were better than those that were used in the army and air force. 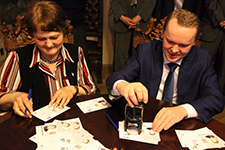 I.G. Freiman was the author of fundamental work "The course of radio engineering" that gave a grounding to scientific and engineering approach to solving many problems of radio engineering and outran many foreign publications. Moreover, he is the author of scientific works on radio-wave propagation, antenna theory, high frequency machines, electronic-vacuum technology and others. It was he who introduced the words radio and broadcasting. In addition, Imant Freyman was an active initiator of development of hamradio in our country.

Readings were finished with the ceremony of memorable cancellation of marked postal card dedicated to the 125th anniversary of the birth I. G. Freyman. The second stage of memorable cancellation was held the next day at LETI Memorial flat of A.S. Popov. At the ceremony General Director of Federal postal service in St. Petersburg and the Leningrad region - a branch of "Russian Post" - Vitaly Dyrdasov took part along with the leaders, academics and members of LETI and the museum's director L.I. Zolotinkina.