Traditional concert "Hello, freshman" was held on September 19, 2014 in assembly hall of the 3rd building of LETI. 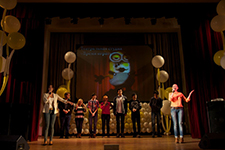 Traditional concert "Hello, freshman" was held on September 19, 2014 in assembly hall of the 3rd building of LETI. All creative groups and associations of ETU Creative Center showed their performances on the stage of assembly hall.

For the first time freshmen got acquainted with creative students of LETI on September 1st at "Dedication to students." And on Friday each team expressed itself entirely. The concert was opened by vocalists of pop vocal studio, guys from modern dance studio "Bonkers_Enklave" showed their dance,   representatives of Club of the Funny and Inventive pleased audience with their jokes and participants of theater studio "Time to play" involved the audience in small stage production! Then musicians played. In addition, club Mind Game "What, Where, When?" and Literary Association LITO LETI performed. Freshmen met with curators and with student’s teams.

Concert atmosphere was very friendly and warm! Freshmen plunged into the creative atmosphere of our university and now they should choose appropriate team.