On June 15, 1889 Technical School Post and Telegraph Office, which became the ancestor of ETU "LETI", was established by the decree of Emperor Alexander III. 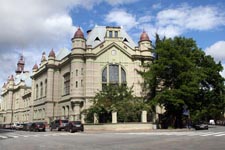 On June 15, 1889 Technical School Post and Telegraph Office, which was ancestor of ETU "LETI", was established by decree of Emperor Alexander III. Within 129 years LETI worked its way up from school to university and prepared a lot of talented staff for national science and industry.

Today Saint Petersburg State Electrotechnical University "LETI" is one of the leading technical universities in Russia. It holds its leading positions in development of electronic, information telecommunication and information management systems and technologies, in the field of technology life support and environmental protection. This ensures high quality and relevance of higher education provided by ETU "LETI".

Our university has rich history of the oldest in Europe higher electrical academic institution which developed as a result of inspired and creative work of many generations of scientists and professors - founders of scientific schools, educational areas, who laid the development priorities of the university for many years.

ETU "LETI" continues to improve its work, actively participates in shaping of the global scientific and educational space, contributes to success of its graduates in competitive environment.

We congratulate the faculty, staff, alumni and students of ETU "LETI" and wish all them unquenchable scientific and creative thoughts, good luck in implementation of plans and strengthening position of the University in domestic and foreign education.