University / News / Gleb Andriishin is the champion of Russia in armwrestling

Gleb Andriishin is the champion of Russia in armwrestling

3rd year student of Computer Science and Technology Facuty Gleb Andriishin was the first in the Superiority of Russia among juniors in the weight category up to 70 kg which was held from the 6th to the 9th of February in Ekaterinburg. 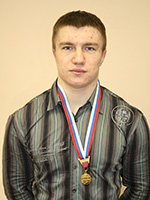 3rd year student of Computer Science and Technology Facuty Gleb Andriishin was the first in the Superiority of Russia among juniors in the weight category up to 70 kg which was held from the 6th to the 9th of February in Ekaterinburg. On his return from the competition our champion told us how he managed to win the tournament.

Competitions were held till two defeats. If the first fight is a failure, one must have more battles to reach the final. If a wrestler doesn’t have any losses he will make less efforts on his way to the final.

Gleb reached the final without a single defeat. It was enough for the final victory to win just one fight.

- At what stage did you have the most difficult rival?

- I always fight better on the left hand at the competition, it is easier for me. In the final I fought on the right one with Arthur Makarov from Tatarstan. He is the reigning champion of Russia, Europe and the world. I lost to him in the final. But that was enough for me to win the championship. When I came to the tournament, no one knew me: among the participants were European and world champions. So my success was unexpected.

- How do you prepare for a competition?

- I do special exercises to strengthen the lateral ligaments in elbow and forearm. To make myself up to the victory I do my special movement before fight. I take a deep breath, raise my shoulders, get up on my toes and go down harshly. After that I feel like a different person.

- How long have you been in arm wrestling?

- I used to do weightlifting and was the champion of the Orenburg region. I wanted to continue here, but there is no section of weightlifting in LETI, so I started to do armwrestling since the first year

- Is it hard to combine study and work with training and competitions?

- Colleagues treat me with understanding. Some of my groupmates abuse me, some of them approve. In my opinion, sport is not a hindrance for the programmer. I want to become a successful person, who combines professional work and career.