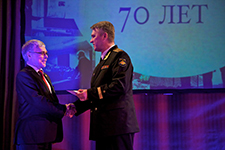 During the anniversary evening congratulations, warm words and memoirs sounded from a scene sounded. Dean of FRT Victor N. Malyshev told the audience about history of the Faculty from A.S. Popov and up to now.