Diploma delivery ceremonies for graduates of LETI were held on 29, 30 June and on 3 July in the assembly hall of building 3. 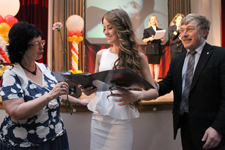 Diploma delivery ceremonies for graduates of LETI were held on 29, 30 June and on 3 July in the assembly hall of building 3.

Graduation ceremony of masters and specialists was attended by chairman of Legislative Assembly of St. Petersburg Vyacheslav S. Makarov, who congratulated the graduates and then handed testimonials for the best workers of the university for many years of hard work.

On graduation ceremony of Bachelors this mission was carried out by Advisor of Chairman of the Legislative Assembly of St. Petersburg Ksenia Lyapina.

Graduates were congratulated by ETU Rector Vladimir M. Kutuzov, Vice-Rector for Academic Affairs Vladimir N. Pavlov and by Deans, who handed diplomas to their best students.

There are 792 Bachelors this years, 48 of them graduated with honors.

Between the awardees vocal, instrumental and dance items, prepared by our students, were shown.

The names and photos of the best graduates are included in the Book of Honor graduates of III millennium of St. Petersburg State Electrotechnical University "LETI"!