University / News / Denis Prokuratov is the winner of Science Slam

Denis Prokuratov is the winner of Science Slam

Denis Prokuratov became the winner of Petersburg project of promoting of science Science Slam on December 6, 2015. 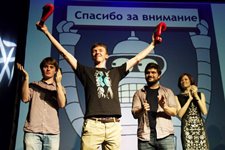 Science Slam is the international project of promoting of science directed on creation of a favorable image of young scientists and researchers.

On the evening action young scientists present to wide audience their researches in the informal atmosphere of a bar or a club. Each speaker tells the audience about his achievements for 10 minutes in interesting and original way. The audience determines by an applause who was better among the others.

Graduate student of Department of Quantum and Optical Electronics Denis Prokuratov became the winner of Petersburg Science Slam on December 6, 2015. His work "Work of laser physicists in the Hermitage" received the hottest applause.

Denis combines work on the Department and in the State Hermitage being the junior researcher of department of scientific and technological examination.

Denis's project is devoted to studying of museum pieces. Most of all it is necessary to define if this or that work of art is the original or a fake. Also physical and chemical methods of research are used for this purpose.