International exhibition "Education without borders" which was attended by more than 50 universities from around the world , including 14 Russian, was held from 27 to 31 March in Bulgarian capital Sofia. 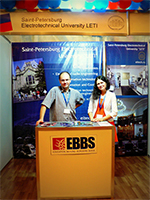 International exhibition "Education without borders" which was attended by more than 50 universities from around the world, including 14 Russian, was held from 27 to 31 March in Bulgarian capital Sofia. Delegation from St. Petersburg State Electrotechnical University "LETI" was among them.

Within the exhibition there was a presentation of LETI for Bulgarian students, meetings and negotiations with representatives of Russian and foreign universities with the aim of building partnerships and developing of academic mobility programs. Citizens of Bulgaria showed great interest to education in Russia, including the ETU. The exhibition was visited by our graduates of different years living in Bulgaria. Some of them brought their children who have expressed a desire to study in LETI.

Meetings with members of our delegation with students and teachers of different schools of Sofia, which included presentations of the University, took place. Students of graduating classes showed big interest in studying in Russia and at our university. The greatest interest in LETI was demonstrated by students of technological college "Electronic Systems" by the Technical University of Sofia and pupils of Sofia vocational high school of electronics named after John Atanasov.

The visit included meetings with direction of leading Bulgarian universities with the purpose of establishing business contacts and subsequent development of student exchange programs and joint research projects.

Representatives of Russian universities were invited to the Ministry of Education and Science of Bulgaria for meeting with the Deputy Minister Ivan Krstev. At the meeting it was mainly told about strengthening ties in the field of science and education between Bulgaria and Russia. Russian and Bulgarian officials have promised to deal with the problem of mutual recognition of diplomas. Host Party emphasized long-term successful work of "LETI" in the field of professional training of staff for Bulgaria.

Bulgarian participants of all meetings and presentations noted big significance of large Russian exposition at the exhibition and of other events confined to it, which certainly made great impact on the local educational community. Both sides stressed the need to continue such practices for strengthening and further promotion of positions of Russian higher education in Bulgaria.

It is very important to give impulse for the development of bonds with Bulgarian colleagues, as well as strengthening ties with our graduates abroad.

We are grateful to Rossotrudnichestvo, Russian Cultural and Information Centre and Russian Embassy in Sofia for organizing activities and assistance in work with Bulgarian institutions and citizens.