Since 2012 the ETU "LETI" has been working with the Fund of Infrastructure and Educational Programs (FIOP ROSNANO) for expertize and development of professional standards for nanotechnology-based enterprises. 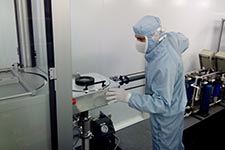 Since 2012 the ETU "LETI" has been working with the Fund of Infrastructure and Educational Programs (FIOP ROSNANO) for expertize and development of professional standards for nanotechnology-based enterprises.

Commenting on choosing of our university as a partner, coordinator of development of professional standards for nanotechnology-based enterprises from FIOP ROSNANO, director of educational projects department, doctor of economics, professor Guzel I. Gumerova noted that "LETI is a well-known university with strong academic school and highly qualified teaching staff. Many university graduates are on leading positions on enterprises in Russia and abroad. So his involvement was fully justified."

"Undoubtedly, standards developed by us will have strong positive impact on industry and education: their interaction will be improved as well as adaptation of graduates in the professional environment. Specialists of enterprises will get an additional incentive for career growth," -  Guzel Gumerova comments on significance of the project. "Leading foreign countries have 20-year experience of work in this area. Russia started only two years ago. And during this time it has achieved serious results. When designing, experience of most developed countries in Europe is taken into account. Thus, they are seriously integrated into the global community."

According to the Director of REC "Nanotechnology", Doctor of Engineering, professor of Micro-and nanoelectronics Department of LETI Andrey V. Korlyakov, one of the developers of standards, our university contributes a lot to this work: "Over 60% of respondents and experts are LETI graduates. The project also involves staff, faculty of the university, the dean of Faculty of Electronics. At the stage of standard testing during  preparation of educational programs teachers and students of LETI will also be involved in work" .

"We aspire to this collaboration. Earlier we had great experience in the development of educational standards in the field of nanotechnology. We want to know the latest trends in this field as well as understand the relationship of professional standards with education. Cooperation will be useful  both for us and for our colleagues," - says Andrey .

At the moment in the framework of twelve professional nanoindustry standards development  their professional public discussion is conducted. Anyone can find projects and give their observations and comments on them at the following resources: