On the 20th of May an Agreement on cooperation between St. Petersburg Electrotechnical University "LETI" and Hanoi Technological University (Vietnam) was signed. 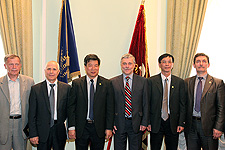 On the 20th of May 2013 Chancellor of St. Petersburg State Electrotechnical University "LETI" Vladimir Kutuzov and the Chancellor of the Hanoi University of Technology in Hanoi State University Nguyen Ngoc Binh (Vietnam) signed a cooperation Agreement. The purpose of cooperation of the Russian and Vietnamese universities is to improve the training of specialists of higher qualification and improvement of the quality of scientific research on the basis of various forms of interaction.

The special interests for the Vietnamese side are information technology, information security, telecommunications and learning of the Russian language. The best way to organize cooperation, according to the parties, is the establishment of direct contacts in specific areas between the concerned departments of the universities. Also, the Agreement contains the interest of the parties in the creation of a Russian-Vietnamese Center for information security and safety of computer networks.