University / News / Carl Siemens in the history of LETI

Carl Siemens in the history of LETI

Carl Siemens was the director of "Siemens and Halske" in Russia and made a big deposit to the establishment and activity of our University. 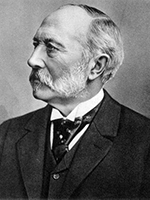 The 3d of March 3 is the birthday of Karl Heinrich von Siemens who made a deposit to the establishment and activity of our University. On the threshold of his anniversary (Siemens would have turned 185 years old), we want to look back and remember what he has done for LETI. Carl Siemens has been the director of "Siemens and Halske" in Russia and since the foundation of ETI (now ETU) has donated money for equipment of institute laboratories with electrical machines and measuring instruments, has organized trainings for students and teachers at the company's factories in Germany.

In 1897 director of ETI Kachalov wrote a letter to Carl von Siemens, in which he asked him to provide opportunities for students of the institute "to inspect all plants and units in Berlin, belonging to his assosiation, without any obstacles". Siemens was famous in Russia, that is why Kachalov wrote to him. Moreover, Siemens not only worked in St. Petersburg but also lived here and became Russian citizen and gentleman by birth.

In reply to this Siemens gave an order to hand the university 400 roubles for reimbursement for costs on living of students who come to Berlin.

So a group, consisting of representatives of administration of the Institute, two laboratory assistants and 17 students, was formed. Participants of the trip have spent two weeks in Berlin. During this time they visited not only the company's plants but also other enterprises of German capital, where they could get a full understanding of electrical products market functioning and of many innovations in the field of electrical engineering and communications.

Later, in 1904, department for production of wireless telegraphy equipment by the A.S. Popov’s system - the first director of ETI - was organized in “Siemens and Halske”.