The unique biosensor system is especially relevant for emergency cardiology, a section of medicine aimed at studying symptoms and developing an optimal and rapid scheme of care for patients with heart disease.

Myocardial infarction, acute coronary syndrome, chronic ischemic heart disease - patients with such diseases are increasingly common with hospital and ambulance doctors. About 18 million people per year from heart pathologies die in the world. Rapid diagnostics and assessment of the patient's condition play a major role in emergencies. Often, this is the only way to avoid fatal consequences.

ETU "LETI" researchers work on the development to help doctors make express diagnostics of the patient's condition "on the go" and provide emergency medical care. Nikita Sitkov, an assistant of the Department of Micro- and Nanoelectronics, junior researcher at the Microtechnology and Diagnostics Engineering Center of ETU "LETI," is currently developing Biosensor System Based on Oligopeptide Aptamers for Rapid Diagnostics of Myeloperoxidase, Myoglobin, and Troponins using a grant from the Foundation for Assistance to Innovations. Part of the research team of the ETU "LETI" center headed by leading researcher Tatyana Zimina take part in the project.

"Delay during resuscitation can be fatal for the patient or eventually lead to serious complications. This project aims to create a sensory system for express diagnostics of protein markers of acute cardiovascular conditions. For example, the level of myeloperoxidase will help doctors assess the degree of myocardial damage, which will allow timely correction of the surgery, reducing the number of complications after surgical intervention."

The project is based on an innovative technology of biomarker recognition in human blood using special elements – peptide aptamers – which selectively bind and are complementary only to a certain protein. As a result of such binding the complex "marker protein-peptide" is formed, the presence of which researchers detect using a special optical system. Scientists search for peptide chains using the Protein3D program developed by Vladimir Karasev, a researcher at the Microtechnology and Diagnostics Engineering Center.

"As a result of the analysis of target protein complexes and visualization of conjugate ion-hydrogen bond systems, it is possible to find areas (amino acid sequences) capable of acting as peptide identifiers, aptamers. Then these sequences are synthesized and placed on biochip; this process is called immobilization. When a drop of blood enters the chip, the marker proteins are detected."

Developers use microfluidics and photolithography technologies to manufacture the biochip. The resulting structure consists of several layers, each of which has its own functional purpose.

The sensor system is intended for diagnostics of several acute clinical conditions. Using it, cardiac surgeons will be able to conduct a rapid assessment of the myocardial damage level, which will significantly increase the success of the surgical intervention. The main distinctive features of the biosensor system are simultaneous analysis of several diagnostic parameters, implementation of the quantitative analysis function, and its high speed. According to the young researcher, the system is highly competitive.

"Rapid tests for basic cardiac markers, which are currently common, are usually implemented as immunochromatographic test strips and perform only qualitative analysis. Traditional troponin test can only reflect irreversible damage to the myocardium, while myeloperoxidase is a protein predictor of adverse cardiovascular events", the developer explains. 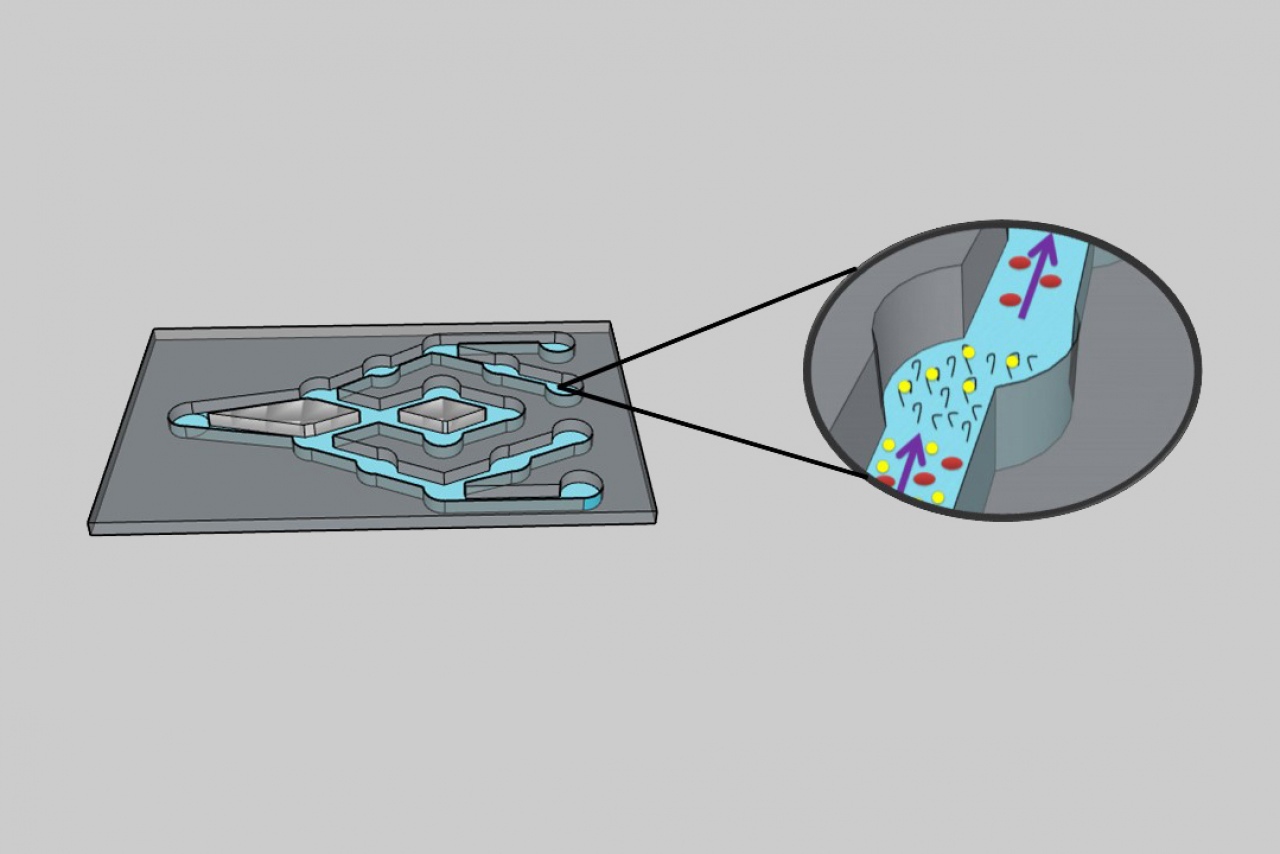 Model of the multi-parameter biochip

The developers plan to create a prototype of a multi-parameter biochip implementing a quantitative assessment of several key markers at once. Using modern hardware and software for signal processing, the young researcher plans to achieve the necessary sensitivity for use of the proposed approach in diagnostics. This will save valuable time in situations when every second counts.

The final result of the St. Petersburg scientist's project will be a laboratory model of a multi-parameter express-diagnostic system. After some revision, it will be ready for clinical trials. Nikita Sitkov hopes that the main consumer of his product will be health care institutions, in particular, clinical and diagnostic laboratories, ambulance crews, physicians, cardiologists, and cardiac surgeons.

For many years, ETU "LETI" has been developing the R&D area of multimodal biosensors for rapid recognition of biomarkers, viruses, and microorganisms, including biomarker diagnostics of acute myocardial infarction, stress, rapid diagnostics of coronavirus SARS-CoV-2 with peptides. University researchers develop the scientific and technological basis for creating biochips for identifying pathogens and testing their antibiotic resistance. The partners of the ETU "LETI" are the Smorodintsev Research Institute of Influenza, the Research Institute of Highly Pure Biopreparations, the Pasteur Research Institute of Epidemiology and Microbiology in St. Petersburg.