University / News / Cooperation of the ETU and TU Ilmenau continues

Cooperation of the ETU and TU Ilmenau continues

In the last week of March Head of RF and Microwave Engineering Institute of Information Technology of Ilmenau professor Matthias Hein read a course of overview lectures on Theoretical Fundamentals of Electrical Engineering in German. 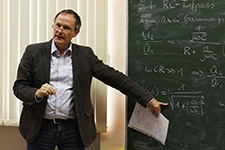 In the last week of March a famous scientist, a Head of RF and Microwave Engineering Institute of Information Technology of the Technical University of Ilmenau (Germany), professor Matthias Hein read a course of overview lectures on Theoretical Fundamentals of Electrical Engineering (Department of Theoretical Fundamentals of Electrical Engineering) in German to the group of Masters of St. Petersburg State Electrotechnical University "LETI". According to the results of the final interview, 15 university students received certificates confirming knowledge of technical German language.

Classes were held in the framework of the Russian-German Engineering Faculty - a joint project of TU Ilmenau and LETI, which implies exchange education of our Masters in German at our partner university and then receiving of two diplomas, as well as interning at the TU Ilmenau or at one of the German companies collaborating with the University.

Mathias Hain commented on the purpose of his mission: "When starting giving lectures in LETI, I proceeded from the fact that my students were Masters and had already learned the course of Theoretical Fundamentals of Electrical Engineering.  So I set a twofold problem to myself. First, I wanted to give students knowledge of Russian technical German, specific terms. Secondly, Fundamentals of Electrical Engineering is a basic discipline in Electrical Engineering, and knowledge of basic terms will help them learn the rest of the German technical vocabulary related to Electrical Engineering better. It was the first time when I lecture in LETI and of course I worried at the beginning. But I am very satisfied with the results of my work. They exceeded my expectations! Russian students turned out to be very motivated in gaining new knowledge, behaved actively at lectures, which sometimes resembled conversations of professionals - students were well prepared". 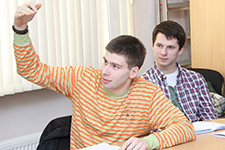 Students of LETI are satisfied as well. They point to the professor's ability to interest students, to dialogue with them on equal terms, and also humor with which Matthias Hein presents things difficult for perception. One of the Masters said: "No one was seen to be bored at the professor 's lectures ."

Mathias Hain has cooperated with LETI for a long time and regards LETI as a very authoritative university that has good reputation in academic circles and that produces excellent professionals. The German professor ascertained not once that our scientists are at the forefront of science when getting acquainted with their achievements at international conferences and exhibitions. Moreover, he has long and very fruitful personal contacts with a number of LETI scientists. And now he said that he made sure that employees of the university are not only good scientists, but also wonderful teachers". Proof to this is knowledge of children undergoing training at TU Ilmenau and attending his lectures .

Speaking about cooperation with our university , Mathias Hain said it had great future. In the last academic year only one student of LETI successfully passed a training course in Germany and received the diploma of this University, and is now studying at postgraduate course there. And this year there are two students of LETI who study at TU Ilmenau. In the next academic year there will be seven of them. Reading lectures of German professors in LETI becomes permanent as well. Professor Hannes Toepfer, a specialist in the field of electrical engineering and computer technology, comes to Saint-Petersburg in May. In the future two professors from TU Ilmenau will lecture in German in LETI every semester.

Although there are problems in this bilateral cooperation, in particularly, language. In Germany there are a few young people who knows Russian language well enough to study at St. Petersburg university. Therefore, according to Mathias Hain, Ilmenau students who want to study at LETI should learn Russian. But our university should introduce courses in a foreign language. For example, in English. Maria Kiseleva, Head of f International Academic Mobility Department of LETI, said that in the Faculty of Information Measurement and Biotechnological Systems the development of two programs in English is being finished. In the near future they will be approved and since September 1, 2014 they will be introduced. That’s why the German professor is convinced that in a year and a half there will be masters from Germany in LETI. 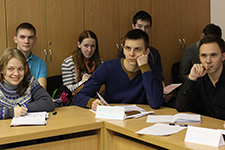 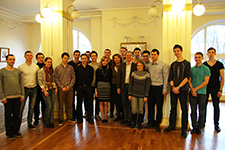 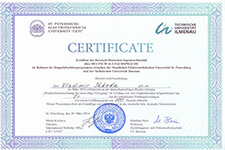