"Electric" ("The Electrician") - is a corporate edition of the Saint Petersburg Electrotechnical Univeristy "LETI" issued since 1928 year. The newspaper is published two times a week. 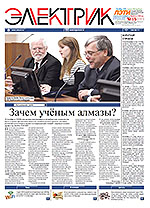 The volume of the newspaper ranges from 4 to 16 pages. The circulation of the edition is 2000 copies. It's target audience includes the teaching staff, employees and students of the Saint Petersburg Electrotechnical University "LETI" and their families.

The newspaper “Electric” came into world on the 1st of May, 1928. It exists and reflects the history of our university for 82 years.

It appeared by the initiative of the most active students and lecturers of the ETU. At that time “Electric” represented communistic ideas that were relevant in the society then. The most popular topics were studies, political education, mass heroism, the building movement, the role of front-line soldiers and so on. The design was not as important as slogans at that time.

In the 90-ies new questions of survival of the higher education appeared. With the beginning of the 21st century there is a new landmark in the development, connected with the Bologna process, the change-over to the bimodal system of education. Problems of modernization of universities are in the centre of attention. “Electric” elucidates all the main changes in this sphere.

So if the newspaper reflected mostly ideological ideas at that time, now it becomes a corporate edition of the university. The design of the newspaper changes according to the spirit of the age, new topics and accents appear.

Now “Electric” gives all the information about the ETU and represents it’s image in university community of Saint Petersburg.

The newspaper “Electric” is published in print, also you can look through it on the web-site of the university.