SPb ETU with its strategic development program became a winner in a competition organized by the Board of Education of the Russian Federation. Our University is recommended as a coordinator of educational activities in Russian national nanotechnological network. 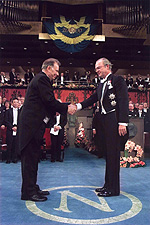 SPb ETU made a contract with big Russian corporations "ROSNANO" and "Vega" for co-producing monocrystals of silicium hybrids.

The most significant results were achieved by scientists from SPb ETU in the field of radioelectronics, information and telecommunication technologies, information-control systems, as well as in life sustenance technologies, safety and resistance to terrorism, environment protection and industry of nanosystems and materials.

We are proud of…

It was in ETU where:

In 2007, ETU became one of the 57 best Russian universities (one of the 24 universities of technology) which won the national bid in the scope of the National Project on Innovations in Education. During the implementation of the Project in 2007-2009, more than 738 million roubles (around 18M EUR) were invested in ETU by the Russian Government, to purchase and implement state-of-the-art equipment, which is mostly unique for the country. A major modernization resulted in a significant increase of the University R&D budget in 2007-2012, amounting to more than 800 million roubles (around 20M EUR) last year.

ETU constantly works on technical forecast within the high-priority directions of its development. The created forecast system is based on the research conducted and the attraction of expert bodies for the assessment of current state and development prospects.

In 2012, ETU and 54 further Russian universities (22 universities of technology) won the national bid on implementation of their Strategic Development Programmes for 2012-2016. In a very early phase of the Strategic Development Program implementation, ETU already established two Centers of Excellence for generation and dissemination of new knowledge on emergent technologies. The priority directions of the University Centers of Excellence are 'Nano, bio, information and cognitive technologies' as well as 'Terrorism counteraction and public safety'.