The team of LETI students was second in the final of local round of the international competition Imagine Cup 2014 organized with support of Microsoft. 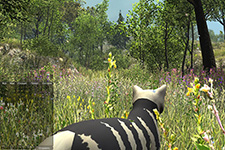 «Dream it. Build it. Live it.» or " Dreams come true" – that is the motto of Imagine Cup. Student teams of Northwest region presented their works at the categories of "Innovation", "Games" and "Social projects". 2nd-year students of Faculty of Computer Science and Technology Edward Zaborowskiy and Maxim Skoryukov also participated in the competition. The guys worked hard and result was not long in coming - their team "Wild Cats" took the second place with a game Wild Cats Online. Basis of the idea was the universe «Warriors». This is a series of novels about the adventures of wild cats and about the ways they survive in their territory. Game server is configured in the programming language Java, database - MySQL, client is developed on the engine Unity3D.

The first place went to the team of BSTU "Voenmech" which presented a multifunctional mobile robot MechBot. The third place was given to the team of SPbSPU for a messenger called AskMeLive.

Imagine Cup 2014 was held in the framework of the conference "Microsoft Technologies in the theory and practice of programming" in which ETU students also approved themselves:

Imagine Cup competition has been held since 2003 and enables graduates and  students from around the world to come up with ideas and put its prototype into life using modern information technology. Winners of Russian stage of the competition, which will take place in April this year, will go to Seattle (United States ) on international final to compete for the award in the form of a grant for development of the project and opportunity to talk with Bill Gates.